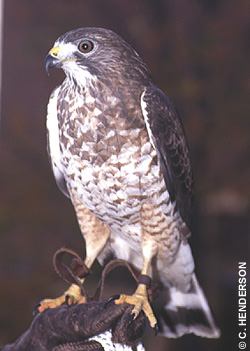 The broad-winged hawk is a medium-sized bird of prey found throughout Minnesota. If you see a hawk with two white bands and two black bands on its broad tail, it's probably a broad-winged hawk.

General description: About the size of a crow, the broad-winged hawk has a dark back and is light beneath. When it is flying overhead, look for its broad, thickly striped tail.

Size: The broad-winged hawk is about 13 to 15 inches long, with a wingspan slightly under 3 feet.

Color: Adults have a dark brown back and a brown-barred breast. The dark tail has white stripes. Juvenile broad-winged hawks have brown, vertical barring on their chest.

Sounds: A high "keeeee" whistle is used to defend the broad-winged hawk's territory. The hawks also make a whining sound.

Male and female broad-winged hawks perform courtship dances in the spring. After couples pair up, they build a nest in a tree from twigs and branches. The female lays two to four light-colored eggs over a period of several days. She broods (sits on, to incubate) the eggs while the male brings her food. Eggs hatch after about a month, and both parents feed the young. The young fledge (learn to fly) at just over one month of age.

Broad-winged hawks eat rodents, insects, reptiles, amphibians, reptiles, and other birds. They skin frogs and snakes and remove the feathers from birds before they eat them.

Broad-winged hawks are found throughout Minnesota's forested region. They are most common in northern forests. You may see one perched on a branch in a tree, watching for a meal to scurry by. They spend their winters in southern Florida and Central and South America.