Canada geese are everywhere in Minnesota. From farm fields to golf courses.

Color: Light brown with a white chin and a black neck, head, bill and feet.

Canada geese mate for life, and both parents help raise the young. The mating season runs from March to April, after which eggs are laid. Hatching begins 25 to 30 days later. Baby geese (goslings), which are covered in yellowish down, leave the nest shortly after hatching.

Lakes, ponds, marshes and rivers. Many Canada geese stay in Minnesota throughout the winter, although some migrate south to any number of states. They breed statewide, but are most common in the western and southern portions of the state.

In recent years the Canada goose population has increased dramatically both in Minnesota and the Midwest. State wildlife agencies have increased bag limits and season lengths in hopes of keeping the population in check. 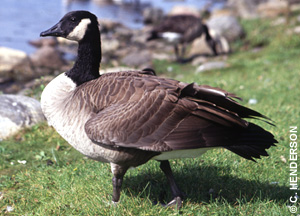