Where to see Minnesota's bald eagles in the summer 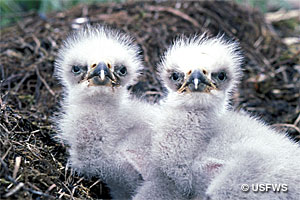 Minnesota and Wisconsin are fortunate to be home to the largest population of nesting bald eagles in the United States outside of Alaska.

In 1989, there were 390 occupied breeding areas in Minnesota, today there are over 700. Nests are constructed in large white or red pine trees, aspen or cottonwood, near lakes and rivers in remote areas. In recent years however eagles are choosing sites near lakes with moderate recreational use, near dwellings and even in metropolitan areas.  There are an estimated 30 active eagle nests in the twin cities metropolitan area

Eagles will often return to the same nest year after year if it is successful. The nest is commonly 6-8 feet across and added onto each year. Eagles lay 1-3 eggs beginning as early as January. Parents take turns incubating the eggs which hatch in about 35 days. The young eagles begin to fly at three months of age (late May through early July). Four weeks or so after they have learned to fly, the young eagles leave the nest for good.

Human disturbance near the nest site may cause eagles to abandon their nests or leave the young vulnerable to severe weather and predators. Therefore, it is necessary to protect nesting areas during the breeding and nesting season. Minnesota Department of Natural Resources' Nongame Wildlife Program personnel and U.S. Forest Service biologists work with other state and private organizations to develop site management plans to protect each bald eagle nest site. This work is funded in part by citizen donations to the Nongame Wildlife Checkoff on Minnesota income and property tax forms.

The map of summer viewing areas indicates several places where you can see eagles during the nesting season. Nest locations are not given for sites (unless they are very obvious) in order to protect the eagles' privacy.

Or your regional Nongame Wildlife Specialist