The bluebird may be Minnesota's most popular songbird. Although bluebirds aren't as common as robins or red-winged blackbirds, their sweet song and beautiful colors leave a lasting impression. They may be seen in the country as well as in suburban areas and city parks.

General description: A blue and rusty songbird found throughout Minnesota.

Bluebirds nest from late March through early August. They build cup-like nests of grass or pine needles in a nest box or some other cavity. The eggs, usually three to five, are pale blue (sometimes white). Typically, two broods are raised during the nesting season.

Bluebirds eat a wide range of insects and wild fruit.

Birds of prey, snakes, and various mammals--especially cats and raccoons--are the main predators of bluebirds. 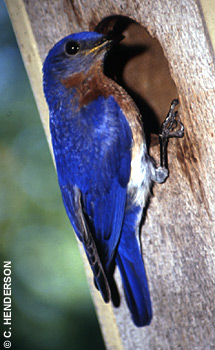 Bluebirds live in open woodlands, roadsides, farmlands, orchards and occasionally suburbs and city parks. The are found in every county in Minnesota.

Bluebird populations declined greatly from the 1930s to the 1960s. The cause was habitat loss and competition from other cavity-nesting birds, especially starlings and house sparrows. The Bluebird Recovery Program of the Audubon Society of Minneapolis partnered with the DNR Nongame Wildlife Program to sponsor workshops, publish education materials and promote the placement of bluebird houses to bring back this wonderful songbird. Minnesota now has one of the most successful bluebird recovery projects in the nation.

Bluebirds are a symbol of happiness. They like to eat meal worms at bird feeders. Male bluebirds are much more brightly colored than females. Although sighting a bluebird is considered an early sign of spring, a few usually linger until late December and some return as early as February. 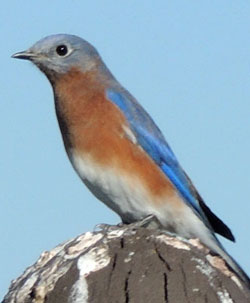