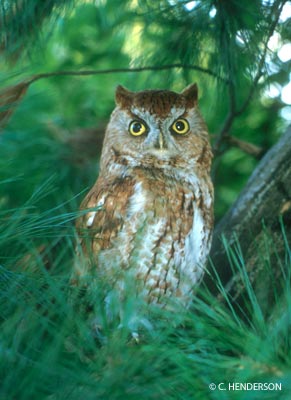 This little owl can be found throughout southern and central Minnesota. It is named for its surprising call, which can sound like a crying child.

General description: The screech owl is a tiny gray or reddish bird with ear tufts. It has big yellow eyes.

Size: Screech owls are 7 to 10 inches tall. When flying, their wingspan can stretch up to 2 feet across.

Color: This owl comes in two color phases (variations), gray and red. Both color phases have yellow eyes and beak.

Screech owls nest in a second-hand nest or tree cavity. They are willing to nest in boxes built for them and sometimes nest in wood duck nest boxes. One was even found trying to nest in a mailbox. The female incubates the eggs, eating little food during the 26 to 32 days it takes the eggs to hatch. Owlets fledge in about four weeks. Don't get too snoopy about this bird?the parents have been known to attack humans who get too close to the nest.

Screech owls eat insects, small rodents, small birds, and reptiles. Sometimes they perch, waiting for food, then swoop down when something attracts their attention. They also may walk along the ground or in shallow water looking for insects or other prey.

Screech owls can be found in deciduous (hardwood) forests, lakeshores, and suburbs throughout most of Minnesota.

Screech owls are fairly common in Minnesota. In some parts of the country their populations are declining due to habitat change, but in other areas habitat change may be helping them. These birds tolerate the presence of humans fairly well. In Minnesota, owls may not be shot, captured, transported, or owned without a permit.

Like other owls, the screech owl has eyes that face forward. This gives it depth perception. The kind of vision you have when you look through two eyes instead of one. Also like other owls, one of its ear holes is higher than the other. This helps it identify the source of a sound.