"Ferruginous" means "rust-colored"--a good description for this big hawk. It can often be seen soaring in wide circles in the sky in open country. This hawk is very rare in Minnesota, but it is seen occasionally along the western edge of the state. No nests have been recorded here.

General description: Like other buteos, the ferruginous hawk has broad wings and a broad tail. When it is flying high above you, you might be able to identify it by a reddish V formed by its dark legs against its lower body.

Size: The ferruginous hawk grows to a length of 23 to 25 inches. Its wingspan can stretch more than 4 feet.

Color: Most ferruginous hawks are rusty with a pale underside and reddish legs and tail. They have black on the tips of their wing feathers. There is also a less-common dark version.

Sounds: The ferruginous hawk's call is a descending kree-e-ah.

Ferruginous hawks usually begin to breed when they are two years old. They make their nest in a bush or tree or on a hillside. The female lays three to five spotted eggs (generally, the better the food supply, the more eggs she will lay). Both parents incubate the eggs until they hatch after 28 to 36 days. Young fledge after 38 to 50 days in the nest. The nest may be reused from one year to the next. 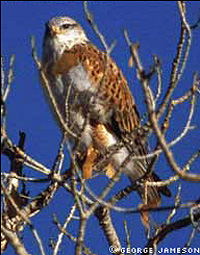 These hawks soar in open, dry country mainly west of Minnesota. They like living in grasslands.

To encourage ferruginous hawks in an area, managers must make sure there are large stretches of undisturbed land, trees for nesting, and habitat to support their prey species. Because these hawks abandon their nests if people bother them, they must have access to undisturbed nesting sites.

Male and female ferruginous chicks develop at different rates. Females can take up to 10 days longer to fledge. However, like most birds of prey, they also grow up to be bigger than the males.