Minnesota is at the southern edge of the range of this huge, secretive north woods owl. You might be able to see it or hear its distinctive, deep-voiced hooting near the Canadian border. They are sometimes seen farther south in winter.

General description: The largest owl in North America, the great gray owl has large rings around its yellow eyes and two white patches near its beak that make it look like it has a snowy mustache. It lacks ear tufts and has a long tail and a relatively large head.

Color: This owl is gray with lengthwise streaks on its breast. It has black and white markings around the front of its neck.

Sounds: The call is a deep-voiced, repeated hoot.

Great gray owls use nests that were abandoned by hawks or ravens, or build their nests from sticks in evergreen trees. Each female lays two to five eggs. She sits on them while the male hunts. The eggs hatch after 28 to 36 days and the young fledge after about 28 days. Great gray owls may use the same nest year after year.

Great gray owls hunt during the daytime, mainly for rodents. They fly around searching for prey, and when they find it, they dive down to make the capture. In the winter they will dive right into the snow to make the catch. 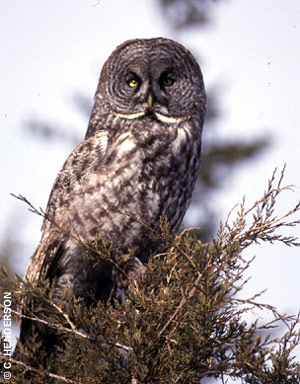 The most likely spot to find them is in northern Minnesota, in and near coniferous forests and bogs.

Great gray owls are uncommon in Minnesota and are not abundant elsewhere. Their populations fluctuate with the availability of prey animals. Owls may not be shot, captured, transported, or owned in Minnesota without a permit.

Great gray owls have been found to live at least 13 years in the wild and 27 years in captivity. Like other owls, the great gray owl has eyes that face forward. This gives it depth perception?the kind of vision you have when you look through two eyes instead of one. Also, like other owls, one of its ear holes is higher than the other. This helps it identify the source of a sound, which is useful in finding prey.