Nicknamed the tiger with wings, the great horned owl is a fearless and feared bird of prey. It is one of the few animals that will kill a skunk, and it may eat more than 4,000 mice per year.

General description: The great horned owl is a large bird of prey with large yellow eyes and feather tufts that look like horns. That's where it gets its name.

Weight: From three to five pounds.

Great horned owls begin nesting in January or February. They usually lay their eggs in abandoned nests of squirrels, hawks or crows but sometimes nest on cliff ledges or in hollow trees. Female owls lay one to five eggs, which hatch in 30 to 37 days. During that period, the male brings food to the female. Newly hatched young are covered with down. Their eyes do not open until they are seven or eight days old. The young owls leave the nest in six to nine weeks.

Most (up to 90 percent) of a great horned owl's diet is mice, voles, squirrels, and other small mammals. These owls also feed on hawks, crows, waterfowl and other birds, including smaller owls.

These owls live in both open and wooded areas. They are found in remote wilderness as well as in rural areas and cities. Great horned owls do not migrate. 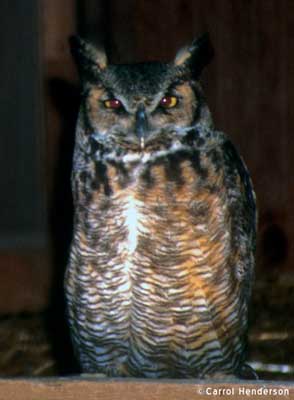 While some illegal shooting and trapping of these owls takes place, the future of the great horned owl appears to be secure. It has adapted well to the presence of people and may be more common now than it was in pre-settlement times. Like other raptors, these owls benefit people by eating destructive rodents.