Lesser scaup (also called bluebills) are a diving duck. They are fast fliers and can be found near larger bodies of water, where they sometimes sit in flocks of more than 10,000.

Sounds: Females have a high-pitched purr. 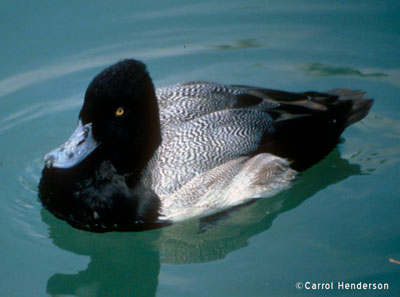 Lesser scaup mate in the spring and typically lay eggs (eight to 10 per nest) in late May or early June. Nests are scrapes in grassy fields or on floating mats of vegetation. Young scaup can fully fly by September. 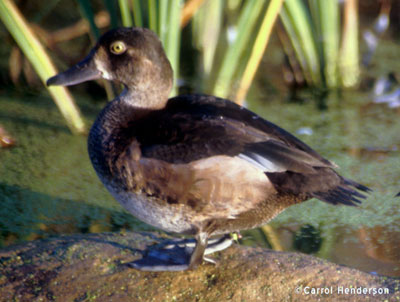 In Minnesota, lesser scaup are found primarily in the northern half of the state and migrate late in the fall. In addition, lesser scaup nest in the boreal forests of northern and central Canada. In the fall, they fly to the coastal marshes of Texas, Louisiana and Florida, where they spend the winter. Many also winter in the Gulf of Mexico.

The lesser scaup population has fallen in recent years. The reason is unclear, and is currently being studied by waterfowl biologists. With a decreased population, Minnesota waterfowl hunters have had poor hunting.

The Lake of the Woods - Pine & Curry Island Important Bird Area attracts migrating waterfowl in both spring and fall. Historically tens of thousands of Lesser and Greater scaup have migrated through the area.