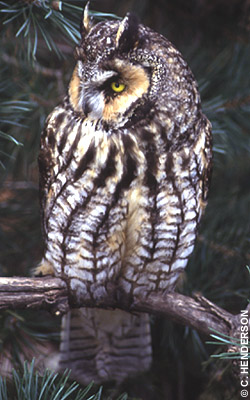 The long-eared owl lives in forests, perching in trees where its mottled brown coloring allows it to blend into the bark. The protrusions on its head that give it its name aren't really ears, but feathers. Long-eared owls are very secretive.

General description: This crow-sized bird of prey has big eyes, short neck, and conspicuous tufts on the top of its head. Its round face is orange with a black-and-white outlined brownish blaze down the center.

Color: The long-eared owl has a gray back and dark bars and streaks on a light breast. Other distinguishing marks include yellow eyes and a rusty-colored face.

Sounds: A long-eared owl makes many different sounds: hoots, shrieks, whistles, alarm calls. Sometimes they make quiet hoots, about three seconds apart. You're most likely to hear this owl during the breeding season.

Long-eared owls breed in March and April. The females lay four to five white eggs in abandoned nests in trees. The eggs hatch after 26 to 28 days, with female doing all the incubating. Long-eared owl parents may act crippled in order to distract predators from their young. The young fledge (learn to fly) at 23 to 36 days of age.

The long-eared owl hunts in open spaces at night for voles and other small animals. Up to 90 percent of the long-eared owl's diet is made up of rodents. It will also eat birds, snakes, and insects. These owls can find their prey in complete darkness. Scientists think they rely on their sense of hearing to do so.

Long-eared owls live in either coniferous or deciduous forests in eastern and northern Minnesota.

Long-eared owls are fairly common in Minnesota. Like other owls, they may not be shot, captured, transported, or owned without a permit.

The long-eared owl is rather thin for an owl. When it sits in a tree it stretches out tall so it resembles a tree branch. This may help protect it from predators.