This tiny, feisty, fast-flying bird of prey is also known as a pigeon hawk because it is pigeon sized. However, it is really a member of the falcon family. Merlins are not a common sight in Minnesota. The best place to look for them is the northern and northeastern part of the state.

General description: Merlins are dark birds about the size of a jay. In flight their wings appear short and pointed. They look almost identical to a peregrine falcon, only smaller.

Size: Merlins are about 10 to 13 inches long. Their wingspan is about 25 inches.

Color: Female and young merlins are dark brown with a streaked neck. The male is gray-blue to purple or brown. A merlin's tail has alternating light and dark bands and a white tip.

Sounds: Merlins rarely make a sound. When they do, it is a rising and falling "kikikikikiki" call or a harsh "peek".

Merlins often use old crows' nests. The female lays four or five spotted eggs. The female (and sometimes the male) incubates the eggs until they hatch after 25 to 32 days. Young fledge (learn to fly) 30 to 35 days after hatching. The young and parents stay together after they fledge, and may even migrate together in the fall.

The merlin's diet is about 90 percent birds. It also eats insects, small mammals, lizards, and snakes. Merlins hunt in the open rather than in forests.

Other birds of prey. 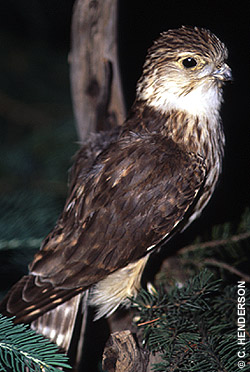 Merlins prefer open country and coniferous forests. In Minnesota they are found mainly in the northeastern and north-central part of the state. They often nest and hunt along lakeshores. Although most migrate south, occasionally one is spotted in Minnesota in the winter.

Merlins are not common in Minnesota, but their range has expanded.

Merlins like to catch their prey in flight. They rush toward an insect or bird and make a quick turn at the end, smacking the prey with their feet to kill it or knock it out.