Cardinals are among the most popular backyard birds in the United States. They are so adaptable that they readily nest in ornamental shrubs and feed right at your kitchen window bird feeder.

The cardinal is one of five crested songbirds in Minnesota; others are the blue jay, tufted titmouse, cedar waxwing and Bohemian waxwing.

General description: The Northern Cardinal is a mid-sized songbird.

Color: Male cardinals are bright red, with a black face and chin. Females are gray-brown on the back, light tan on the breast, with bright pink highlights on the wings, tail, and crest. A female cardinal's bill is bright orange-red.

A cardinal's nest is a bulky structure of vines, leave and twigs. It is often hidden in a thicket. The nest is usually within ten feet of the ground. Three to four cardinal eggs will hatch after twelve days, and the fledglings leave the nest when they're between ten and twelve days old.

Cardinals are very adaptable. They are found in hardwood forest habitats, small rural and urban woodlots, farmstead, orchards and urban backyards. They do best where there is thick, shrubby growth for them to nest and roost in.

Northern cardinals are common in Minnesota. As a breeding species, it spread from southeastern Minnesota into Minneapolis and west to Owatonna by the 1920s. Now it occupies much of the state.

Once considered a colorful pet with a unique song, Northern cardinals are now protected under the Migratory Bird Treaty Act of 1918. The cardinal is a relatively new member of Minnesota's bird fauna. The state's first record for a cardinal-sighting was in 1875.

You can attract cardinals to your feeder by filling it with black-oil sunflower seeds mixed with other large nuts and seeds, including safflower. Cardinals will also eat mealworms placed in a small tray. More bird feeding tips 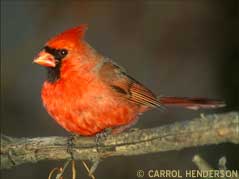