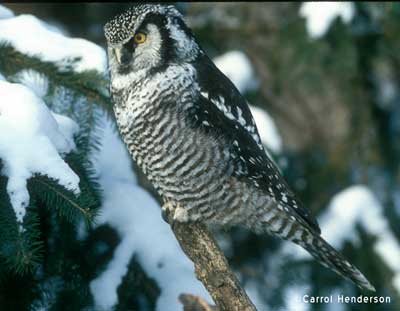 The hawk owl gets its name because it flies like a hawk and is shaped a bit like a hawk. This medium-sized owl is not often seen in Minnesota, but it does drop in from Canada during the winter. During its visits, this owl is often seen perched at the very top of a tree or utility pole during the day.

General description: The hawk owl is best distinguished by its hawk-like shape and owl-like face rimmed by distinct black semicircles. Also, look for its long pointed tail and the horizontal brown lines that completely cover its underside.

Size: The hawk owl is about 15 to 18 inches long. When flying, it stretches about 28 inches from wingtip to wingtip.

Color: This owl has a brown back and a white chest and belly with thin, light brown bars running across. Its face is white with black markings. It has a white-spotted black forehead.

Sounds: Hawk owls make a ki-ki-ki sound when they are alarmed. They also screech and whistle.

Hawk owls begin to breed when they are one year old. They make their nest in cavities, in nests abandoned by other birds, or on top of old stumps. The female lays her eggs between April and June. She will lay three to nine eggs, depending on the food supply (she lays fewer eggs when food is scarce). The eggs hatch after 25 to 30 days. The young birds fledge when they are about a month old.

In the summer, rodents are the favored food of the hawk owl. In winter, they are more likely to eat other birds. Hawk owls hunt during the day.

Hawk owls are found in northern forests and bogs. They prefer less dense forests of spruce and tamarack, and like areas next to clearings.

In Minnesota owls may not be shot, captured, transported, or owned without a permit.

The hawk owl is very tame and often will stay put when approached by humans. It gets its name from the shape of its head (it's flatter than the heads of most owls), its long tail, its hawk-like flight pattern, and the fact that it hunts during the day.