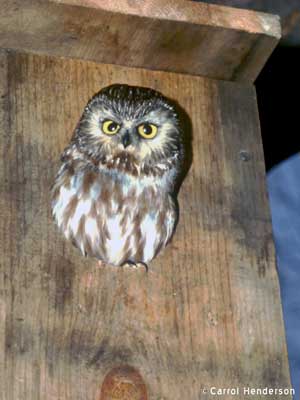 The saw-whet owl is the smallest owl east of the Mississippi River. It is found throughout Canada and Minnesota and the rest of the United States at various times during the year.

General description: The saw-whet owl is a small brown owl that has white belly stripes and no ear tufts. It is most common in evergreen (coniferous) forests.

Sound: It makes a wide variety of calls, most commonly a long series of short, whistled notes.

Saw-whet owls nest in tree cavities or nest boxes in heavily forested areas. They typically lay five or six eggs that hatch after about a month.

Saw-whet owls live in coniferous forests and cedar swamps of northern and central Minnesota. Some migrate, but many stay in Minnesota each winter. Saw-whet owls nest in Canada, northeastern and north-central states, and in the Appalachian and Rocky mountains.

The sew-whet owl is fairly common in the forested parts of northern and central Minnesota. It's illegal to shoot or trap these and other owls and raptors, and violators face large fines.

This owl is named for one of its calls, which some say sounds like a saw being whetted (an old-fashioned word that means sharpened).