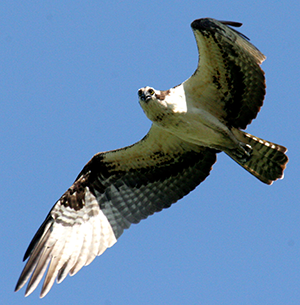 The Osprey (Pandion haliaetus), also known as a “fish-hawk” is one of the larger birds of prey found in Minnesota, notably near rivers and lakes. They have a distinctive eye stripe on their head, with notable dark wings and backs and a light-colored belly.

The Osprey nests in spring and summer. They build large bulky nests of branches and sticks, similar to eagle nests, however always near water. The male usually finds the materials and the female builds. They line the nests with bark, grasses, and other plant materials. They will also add manmade debris they find along the shoreline such as plastic bags, water toys, fishing line. They will return to their nest annually and continue to add materials with each season. Nests can get as large as 10 feet deep and 3-6 ft diameter.

Females lay two-four cream- colored speckled eggs that hatch in about 38 days of incubation, however not all hatch at once. Fledglings leave the nest after about 50-55 days.

The Osprey is the only raptor that almost exclusively eats live fish. They usually plunge feet-first into the water to catch fish with their sharp talons. They have special barbed pads on their feet that help them hold onto slippery fish. At incredible speed, they dive from great heights down to 3 feet underwater to capture their prey.

As many other birds of prey, Osprey have suffered from the deadly effects of pesticides (DDT), persecution and habitat loss. At one point they were officially listed as a Special Concern Species in Minnesota, however, reintroduction efforts have sustained and stabilized their population to a healthy level, removing them from the list in 2015. Read about the Osprey’s success story in MN. 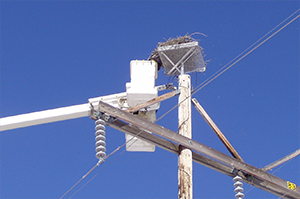 Occasionally Osprey nests become a fire hazard or a human health hazard when they are built on power or cell phone structures. In these cases it may be necessary to remove the nest. Whether it is an inactive or active nest, a permit is required for nest removal (taking). Under permits issued by the Minnesota Department of Natural Resources, a number of these nests are removed each year when osprey nest in hazardous sites. 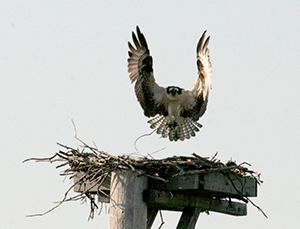 Ospreys are federally protected by the Migratory Bird Treaty Act (MBTA) (16 U.S.C. 703-712) and state protected by Chapter 97A of the Minnesota Statutes. Pursuant to the federal act, it is unlawful to take, possess, buy, sell, purchase, or barter any migratory bird (including the Osprey), including feathers or other parts, nests, eggs, or products, except as allowed by implementing regulations,  Although both active and inactive Osprey nests are protected federally, only active nests require federal permits for taking.

Protected Wild Animals: Unless allowed under the game and fish laws, a person may not take, buy sell, transport, or possess protected wild animals of this state without a license.

Exceptions to these regulations are provided in statute 97A.40 Subd. 5., which allow the Commissioner of Natural Resources the authority to issue a special permit to take animals doing damage such as:
Wild Animals damaging property: Special permits may be issued with or without a fee to take protected wild animals or to remove or destroy their dens, nests, eggs, houses or dams for the purpose of preventing or reducing damage or injury to people, property, agricultural crops, or other interests.

State permits to take inactive Osprey nests are issued by The Commissioner of Natural Resources. Requests for such permits should be submitted via email to the MN DNR, Division of Ecological and Water Resources, Nongame Wildlife Program, Permits program. OR Permit information can be found under Wildlife Removal and Depredation, contact Heidi Cyr at [email protected] 651-259-5107 https://www.dnr.state.mn.us/permits/animals/index.html

NOTE: There are NO provisions in state or federal law for verbal authorizations to remove active or inactive nests.

Osprey nest in tall artificial structures (telephone poles, channel markers or platforms) and snags or broken-topped trees. They prefer a clear view of the nearby area, access to water for fishing, and high enough to evade predators.