The prairie falcon is a bird of prey is found primarily in the western United States. In Minnesota it is sometimes seen during its spring and fall migration.

General description: Like other falcons, the prairie falcon can be distinguished from hawks in flight by its pointed wings. You can tell it from other falcons when it's in the air by the dark markings where its wings join its body on the underside.

Color: The prairie falcon is light brown above and pale below. It has a dark "mustache" and dark areas beneath its wings.

Prairie falcons usually begin breeding at two years of age. In late winter or early spring the female lays three to six eggs on a cliff or in an abandoned nest. The eggs hatch after about a month. The young are able to fly after 40 days.

Prairie falcons eat other birds. They chase them in the air, then capture them on the ground. They also eat small mammals and the young eat insects. They tend to develop a liking for one kind of food and then eat that until the supply is depleted.

The prairie falcon has few enemies, although it is occasionally hunted and killed by great-horned owls. Young are eaten by coyotes, dogs, badgers, bobcats, eagles, and owls. 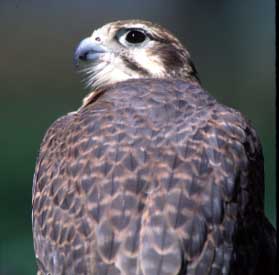 True to its name, this high-soaring bird likes wide open spaces. It is very rare in Minnesota

Prairie falcons may be declining in some places due to habitat loss and possibly due to nest robbing by people and rodent poisoning.

Life is tough for a baby prairie falcon. Scientists estimate that 75 percent of the young die before they have a chance to mature. Adults may live to be 20 years old, but the average lifespan is less than three years.