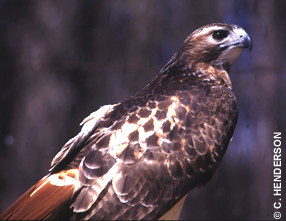 The red-tailed hawk is large bird that feeds mainly on rodents. It flies fast and has excellent vision. It can spot prey from hundreds of feet in the air. The red-tail is commonly seen in both rural and suburban areas that have woodlands, prairies, grasslands, or swamps.

General description: From below, a soaring red-tailed hawk has a broad tail and wide wings. Its reddish tail can often be seen while the bird is perched in trees or highway power line poles.

Red-tailed hawks nest from February to June. The female lays one to four eggs, which take 28 to 32 days to hatch. The young, which are raised by both parents, are covered with white down for the first week, until feathers begin to grow. After six or seven weeks, the young hawks finally leave the nest.

Great-horned owls and crows may raid nests and take young. Red-tailed hawks are sometimes killed by illegal shooting and trapping, and by collisions with cars.

Swamps, woodlands, and prairies. Red-tailed hawks are found throughout Minnesota. In the fall, they begin to migrate to southern states.

The red-tailed hawk has a sharp, curved beak that's used to tear its prey into pieces for eating. The bird has great eyesight, which helps it see prey on the ground while its flying high overhead.