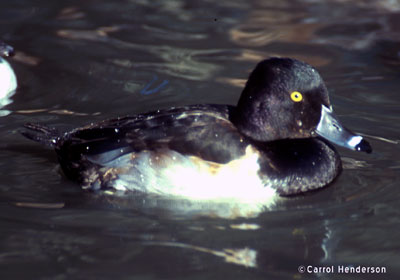 The ring-necked duck is a common Minnesota diver. Ring-necked ducks breed in Minnesota's northeastern counties, though they're found in lesser numbers in other parts of the state as well. Ringnecks prefer small bodies of water, such as wooded potholes.

Color: Bright yellow eyes and dark body and wings. Both drake and hen have a white ring on the front of their bill. Males are mostly black; hens are dark brown.

Sounds: The female has a high-pitched purr. 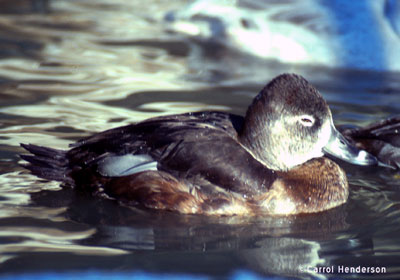 The ring-necked duck nests in boggy marshes or small lakes, surrounded by sedges, cattails and water lilies. They mate in early April, and most eggs (about six to twelve per nest) are laid a month later. The ducklings grow fast, and fly in about 50 days after hatching.

Most ring-necked ducks breed in Canada, though some breed in marshlands of northeastern Minnesota. Ringnecks winter along the coasts of Texas, Louisiana and Florida.

Ring-necked duck numbers have been steady. Ringnecks are typically the third or fourth most-harvested duck species in the state, depending on the year.

The ring-necked duck gets it's name from its brown neck ring. This duck is also called ringbill, because it has a white ring at the end of its bill.