Ring-necked pheasants were first successfully imported from China to the United States in 1881. Their first successful release in Minnesota came in 1916. The ring-necked pheasant is one of Minnesota's most popular upland game birds. It is a grassland-dependent species most commonly seen in rural areas near grassy fields and grain crops, such as corn. Pheasants eat insects, weed seeds and grain and can survive a relatively wide range of temperature conditions.

General description: The ring-necked pheasant is a chicken-like bird with a long tail found mainly in the agricultural lands of rural America.

Color: Males (called cocks or roosters) have mostly reddish-orange body feathers, greenish black heads with a red eye patch and white neck rings. They also have a sharp spur on each leg which can be used to differentiate first-year males from older males. Females are mottled brown which aids in their camouflage when sitting on a nest.

Sound: Ring-necked pheasant roosters crow loudly in spring and summer, especially at dawn and dusk. A rooster's crow is often followed by loud, rapid beating of the wings that can be heard only from relatively close distances. Roosters also often cackle when they fly. 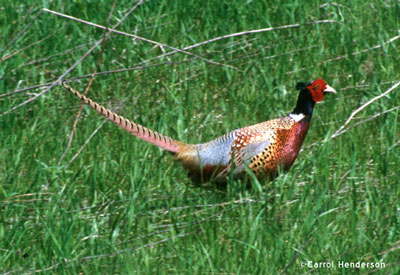 Pheasants begin mating in April and May. Hens lay an average of 12 eggs, which hatch in 23 to 25 days. They are persistent re-nesters. If a hen loses her nest before it hatches, she will lay another albeit smaller clutch until it successfully hatches or until she runs out of energy reserves to lay more eggs. Re-nesting attempts can hatch as late as the end of August in some years. Despite being capable of laying multiple clutches each year, a hen will only hatch one set of chicks (i.e., brood) per breeding season. Hens will not re-nest if they lose their brood.

Newly hatched chicks weigh just 18 grams on average. They are covered with downy feathers and can walk and feed themselves as they follow the hen away from the nest. After only one week, the young pheasants begin to grow flight feathers but can fly only short distances. By 3 weeks of age, they are capable of longer flights up to approximately 150 feet. They don't leave their mother for at least 10 weeks, but brood mixing does sometimes occur.

Pheasants eat insects, weed seeds, corn, soybeans and other crops. Insects are the primary food for young chicks as the protein helps them grow very quickly during the first few weeks of life. By 5 weeks, chicks can weigh almost 0.5 pounds (225 grams).

Fox, coyote, owls and hawks are the primary predators. Raccoons and skunks eat pheasant eggs. Other animals likely prey on eggs, chicks, and/or hens, too. 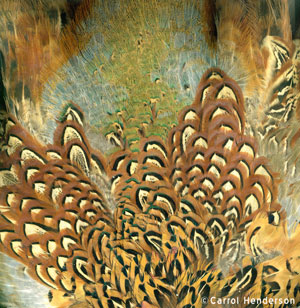 Pheasants are a grassland-dependent species associated with agriculture. They breed in grasslands but spend other parts of the year in both grasslands and cattail marshes near grain fields. Pheasants are typically found in central and southern Minnesota. They do not migrate but they do move seasonally from breeding areas to wintering areas depending on food availability and weather conditions.

Pheasants can be very prolific if given the right conditions, but keeping a stable pheasant population is difficult in Minnesota without permanent protection of grasslands and wetlands. There aren't enough idle grasslands for hens to nest in and not enough cattail marshes where they can hide from during cold winter weather. Pheasant die-offs do occur during extreme winter conditions such as blizzards. Each year, Minnesota hunters harvest an average of 350,000 roosters.

To avoid danger, ring-necked pheasants often run rather than fly. Pheasants are frequently seen along gravel roads eating small pebbles (called grit), which help the birds digest food. During extreme winter weather, pheasants can go up to two weeks without feeding by reducing their metabolism and energy requirements.