When a ruffed grouse flushes from underfoot, the loud sound can startle even experienced outdoors people. This woodland bird is the most popular of Minnesota's upland game birds. Noted for its muffled drumming sounds during the spring mating season, the ruffed grouse is present in Minnesota forests from Iowa to Manitoba.

General description: During courtship, ruffed grouse display banded fan-shaped tails. Males also have a concealed neck ruff (hence the name "ruffed grouse") that they display during courtship. Color phases range from gray to chestnut. In winter, ruffed grouse have comb-like fringes on their toes that, like snowshoes, allow for easy travel on snow.

Sounds: Each spring, male ruffed grouse perform a mating ritual that sounds like the beating of a distant drum. The male "drums" by compressing air beneath its wings. The bird makes the sound in the hopes of attracting a female grouse. Most males drum on a log, but they may also stand on roots and boulders. 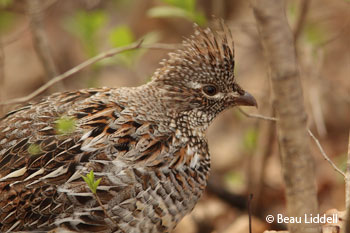 The peak of the mating season is late April. Nests are placed on the ground, usually in dense forest in a depression next to a tree trunk or stump. Hens lay about 10 to 14 eggs that hatch in 23 days. The male grouse has no parenting role. The chicks stay with the hen until late September and are fully grown in 16 weeks.

Ruffed grouse favor the buds and twigs of aspen but also eat the fruits of dogwood, mountain ash, and thornapple. They also eat rose hips and the green leaves of clover, strawberries, bunchberry, aspen and some ferns. Insects are the primary food of ruffed grouse chicks.

Many animals hunt ruffed grouse, including birds of prey such as goshawk, great horned owl, and various mammals such as fox, fisher and bobcat. Humans also hunt and eat ruffed grouse. 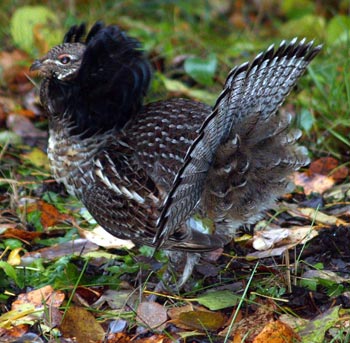 Ruffed grouse are found in forests from southeastern to northwestern Minnesota. Young to middle-aged aspen forests provide the best habitat. Alder lowlands and patches of gray dogwood are especially attractive to ruffed grouse in summer and fall. During winter, ruffed grouse spend nearly all of their time in snow burrows to stay warm and avoid predators. A ruffed grouse lives most of its life within just a few acres.

Ruffed grouse are loners. Unlike most other game bird species, which form coveys or flocks, ruffed grouse spend most of their adult life alone, except during the mating season.