Flocks of these open-land grouse were once so large that pioneers said they sometimes blocked the sun. But as Minnesota's grasslands and brushlands have disappeared, so have sharp-tailed grouse. Once found throughout the state, today this bird's range is restricted to northwestern and east-central Minnesota.

General description: The sharptail is a large grouse, somewhat larger than the ruffed grouse, that lives in open grassy or brushland areas.

Weight: Between two and three pounds.

Color: Sharp-tailed grouse are a mottled brown and gray. During spring, the male's eyebrows are yellow and its air-inflated throat sacks are lavender.

Sound: A cackle while flying. During spring mating season, males will try to attract females by making coos and clucks, stomping their feet, and clicking their tail feathers.

During the summer and fall, sharptails eat a variety of weed seeds and small grain. During the winter, buds and twig ends of arctic birch, paper birch and aspen are favored. Chicks eat mainly insects during the summer. 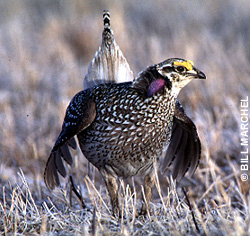 To attract a female for mating, male sharp-tailed grouse perform a courtship dance. Each spring, as many as 25 males gather in a grassy area and begin to display. The same dancing ground, called a lek, is used each year if the habitat remains unchanged. Females visit the lek and mate with the best displaying male. The female nests in grass or beneath a shrub, usually near the dancing area and lays 10 to 14 eggs.

Large open areas with grass, brush and some trees in northwestern and east-central Minnesota. If trees begin growing up in the open areas, the sharptails abandon this habitat.

The once-thriving sharp-tailed grouse population has declined sharply in the last 50 years. The reason for this has been the loss of grassland and brushland habitats. Controlled burning and tree clearing has helped prevent some open brushlands and grasslands from turning into woodlands. This has helped sharptails.