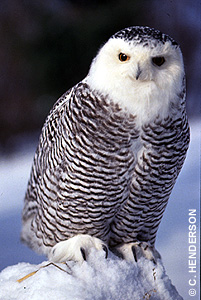 The snowy owl nests in the arctic tundra in northern Canada and Alaska. But during many winters, this large, white raptor comes to northern Minnesota to hunt voles, mice, and other small animals.

General description: The snowy owl is a large, white owl with a round head, yellow eyes, no ear tufts and a black beak.

Weight: Five pounds. (About the same size as a great horned owl.)

Color: Some snowy owls are nearly pure white. Others are heavily speckled in black or brown.

Sound: Although snowy owls hoot and make various other calls during the nesting season, they are mostly silent during winter migration.

Snowy owls do not nest in Minnesota. The female snowy owl lays her eggs on a grassy hummock in the arctic. The number of eggs varies, depending on the amount of food in a particular area.

Some snowy owls are killed by great horned owls, coyotes, and foxes.

Snowy owls live on arctic tundra, open grasslands and fields, and even on frozen stretches of water. When they migrate into northern Minnesota they are sometimes seen hunting for food in railroad yards and other city areas. They usually perch on the ground or on buildings or utility poles.

Some years many snowy owls visit Minnesota. Other years almost none come here. They are seen most often in the northern half of the state. However, there is no permanent population of snowy owls in this state. During winters when snow and cold in Canada drive snow owls south (known as "invasion years") these birds may be seen in the southern part of Minnesota.

The snowy owl is well camouflaged to hunt its prey in snow-covered areas. Biologists capture snowy owls by casting a fake mouse with a fishing pole into an open area and then reeling in as fast as possible. As the owl flies down to catch the mouse, it is netted.