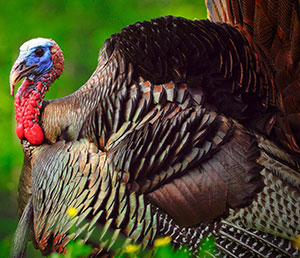 The restoration of the wild turkey over the past 25 years is one of Minnesota's greatest conservation success stories. Once rare, today wild turkeys are becoming a common sight throughout southern and western and even central Minnesota. The birds, which usually travel in flocks, are often seen in wooded areas next to farm fields and pastures.

General description: The wild turkey is a big black or gray bird with a round body and tiny head. Males, called gobblers, have a tail that, when spread, looks like a large fan.

Length: About 3 feet, with a 4-foot wingspan.

Color: Males are mostly dark brown and black, and have a red head, neck, and wattle (the fleshy growth that hangs beneath the chin). Hens are brownish gray. 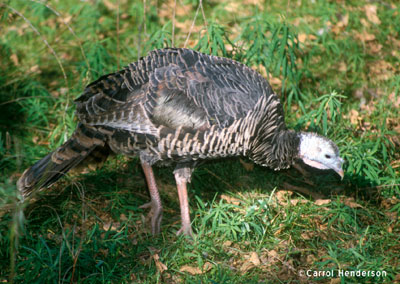 Sounds: An assortment of yelps, gobbles, purrs, putts, and other calls.

Turkeys mate from April to May. Hens lay 10 to 12 eggs, which hatch in about 28 days. The young, called poults, are able to fly in three or four weeks, but they stay with their mother up to four months.

Turkeys eat almost anything they can catch, including ferns, grasses, grain, buds, berries, insects, acorns, and even frogs and snakes.

Wild turkeys form flocks of six to 40 birds that roost in trees each evening. In 1782, the turkey lost by a single vote to the bald eagle to become the national bird.