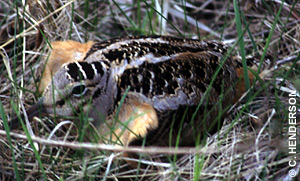 This long-billed woodland bird is one of Minnesota's smallest game birds. It is typically found in the eastern half of the state, near wooded areas and wetlands. Woodcock, which are most active at night and in the early morning, eat mainly earthworms, grubs and insects.

The woodcock is a ground nesting bird. The spring hatch takes 20 to 21 days, with an average of four young. Young woodcock are able to fly in 25 days. They are independent in six to eight weeks.

Mainly they live in wooded areas in the eastern to northeastern part of the state. Woodcock are migratory birds,and spend the winter in a number of southern states.

The woodcock population has been on a steady decline. During the 1999-2000 hunting season, Minnesota hunters harvested about 54,000 birds, which was the fewest since the 1987-88 hunting season. The DNR cuts alder and willow brush to renew brush growth used by woodcock for nesting and feeding habitat.

The woodcock's bill has highly sensitive nerve endings that can detect earthworm movement below the soil. This bird is also known as the bogsucker, timberdoodle, hookumpeke, and night peck.