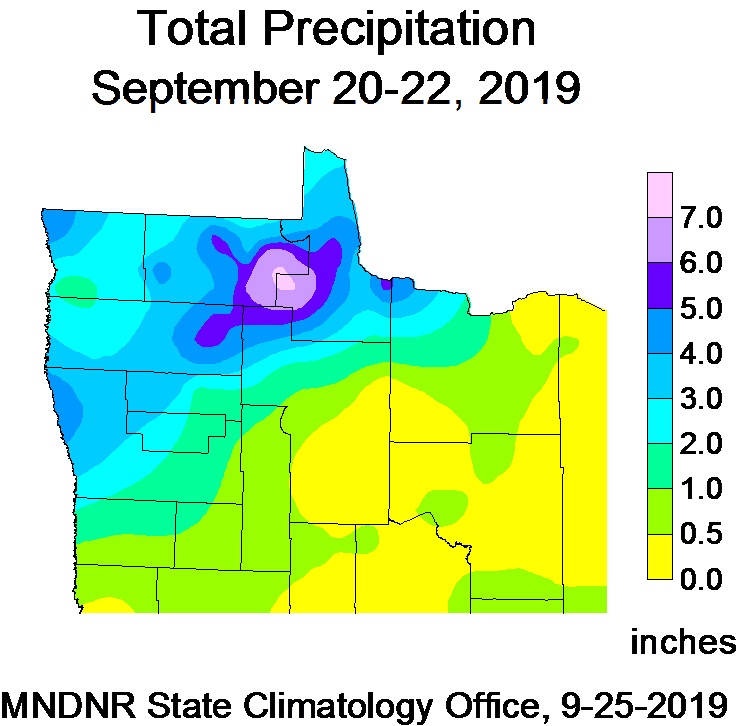 Map of rainfall totals, September 20-22, 2019. Note that this event occurred primarily on September 20th and 21st, but that some observers did not report data until the 22nd.

Heavy rains pounded parts of far northwestern Minnesota on September 20th and 21st, leading to some of the highest 24-hour totals of the year anywhere in the state, as well as at least minor flooding.

The rains came in two distinct waves, the first, beginning on the afternoon of Friday September 20th, as a large cluster of heavy thunderstorms moved slowly across the area, dropping 1-4 inches of rain, mostly over Roseau and Lake of the Woods counties. A more widespread heavy rain event unfolded during the night, as bands of strong thunderstorms crossed from North Dakota into northwestern Minnesota.

The atmospheric conditions supported a trifecta of heavy-rain-producing conditions: 1) The atmospheric moisture content for this time of year was unusually high; 2) The winds aloft promoted relatively slow-moving thunderstorms; and 3) The feed of low-level moisture into the region was oriented to keep storms forming and passing over many of the same areas repeatedly. The result was a large area of thunderstorms with intense rains, moving slowly across the area while regenerating continuously.

Roseau, Hallock, Thief River Falls, Baudette, and Warroad all received over 3 inches of rain, and many automated and citizen-volunteer sites received 5-6 inches during the this event. The highest total of 7.12 inches came from the official National Weather Service cooperative observer at Norris Camp, in Lake of the Woods County. All but 0.02 inches of that came in 24 hours, making this a "200-year storm" for that location.

These heavy rains were just the latest in an unusual string of significant weather events occurring near the fall equinox. Each year since 2016 has seen at least one noteworthy, record-breaking event of some sort within a few days of the fall equinox. For instance: