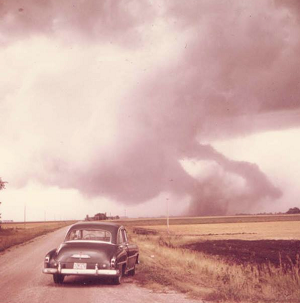 Tornadoes are among the most devastating and awesome local storms that occur on Earth. The United States has the dubious distinction of having the greatest frequency and the most severe tornadoes. Tornadoes have the power to lift railroad cars and sail them many yards through the air. The power of their winds can make deadly missiles of loose objects, including broken glass. Even pieces of straw have been found embedded in trees and boards after a tornado.

During the winter months (December through February) tornado activity is concentrated in the southeast U.S. and along the Gulf Coast. As spring (March/May) progresses, tornado occurrence moves north and west across the central Mississippi and Ohio River Valleys. By summer (June/August) the potential threat of tornadoes has spread across the continental United States and Southern Canada. During autumn (September/November), tornadic activity gradually retreats to the south and southeast sections of the country and is often associated with hurricanes.

This seasonal drift is principally caused by the increase of warm, Gulf moisture into the central part of the country during spring and summer, decreasing during the fall and winter. The mixing which occurs when the moist Gulf air clashes with contrasting colder, drier air from the north and northwest contributes to the triggering of tornadoes.

Minnesota lies along the north edge of the region of maximum tornado occurrence in the United States. often referred to as Tornado Alley.

The most probable danger period in Minnesota, therefore, is late spring and early summer, between 2:00 PM and 9:00 PM. However, tornadoes can and do occur at any time of the day or night.

Many of the deadly and damaging tornadoes occur in groups of outbreaks that often last from 3 to 12 hours. One of the worst such outbreaks in Minnesota occurred on June 17, 2010, when  48 tornadoes affected 22 counties in northwestern, west-central, central, east-central, south-central, and southeastern Minnesota over a period of six hours. Other noteworthy large-area outbreaks occurred June 16, 1992 (which included the state's most recent F5 tornado, in Chandler); June 28, 1979, when 16 tornadoes slashed across the state from northwest to southeast; August 6, 1969, when powerful and massive tornadoes devastated parts of northern Minnesota; and the April 30, 1967 "Black Sunday" outbreak in southern and southeastern Minnesota.