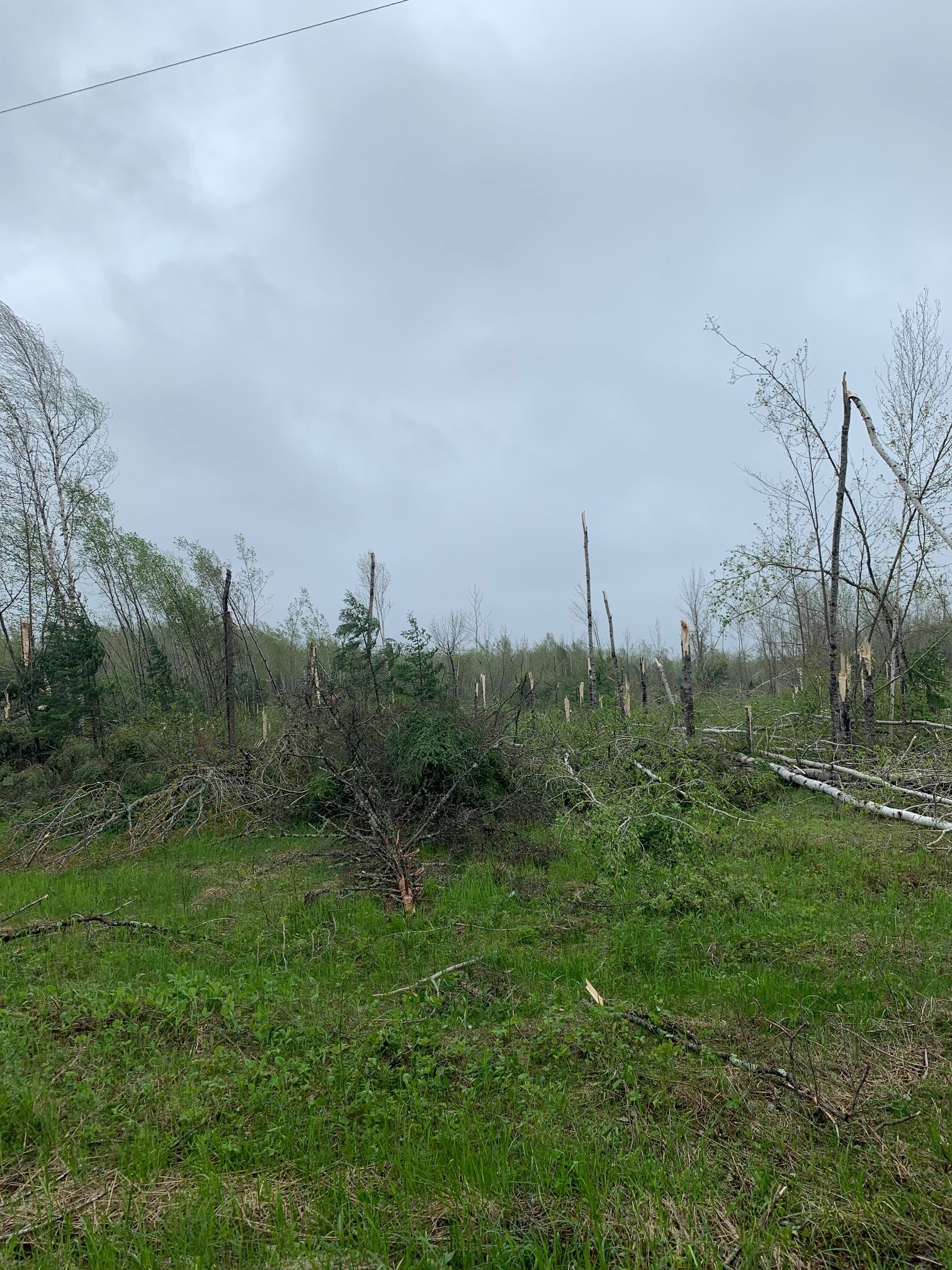 Extensive damage to forests in northeastern Itasca County, about 8 miles northwest of Side Lake, where trees were uprooted, snapped, and flattened by storms on Memorial Day (Monday May 30) of 2022.
Courtesy of A. Carlson, DNR Forestry

Update June 3, 2022. Please note: this story will be updated periodically until all surveys and assessments are complete. All counts of damage or harm to humans should be considered preliminary and potentially out of date until this tag is removed.

Another major severe weather event struck Minnesota, as an outbreak of long-track tornadoes and damaging winds affected southwest, west, central, north, and northeastern parts of the state on Memorial Day - Monday May 30, 2022.

May 2022 had already seen a lot of severe thunderstorm activity, and Memorial Day weekend capped off the active month with a fierce display of destructive storms. The second half of the weekend became stormier and stormier, culminating in a major severe weather outbreak on Monday/Memorial Day afternoon and evening.

Thunderstorms with large hail and gusty winds first hit far southwestern and northwestern Minnesota around sunrise on Sunday May 29, 2022, with golf ball-sized hail reported at Worthington and  near Gully in Polk County. More hail-producing storms then hit northern Minnesota on Sunday afternoon and evening, with 1-inch-diameter hail observed in parts of Red Lake and Koochiching counties.

A more significant severe weather event erupted after midnight, with storms producing hail and damaging winds from southwest into central and east-central Minnesota early on Memorial Day (Monday May 30). The first intense wind report came from Worthington, which recorded 68 mph at 2:58 AM, followed by 66 mph at Marshall at 3:05, and then 84 mph at Olivia in Renville County at 3:55 AM.  The storms raced north-northeastward, producing more strong winds, including 65 mph at Sauk Centre, and 68 mph just northeast of Brainerd. The winds blew a grain bin onto the road near Sacred Heart, flipped pontoon boats in Aitkin County, and blew down trees and power lines from Renville County into the Brainerd Lakes region. The storms also produced hail from 1-2 inches in diameter in the Moose Lake and Sturgeon Lake areas.

Monday morning's storms would have qualified as a "main event" on most days, but in May 2022, the pattern has been to have intense morning storms followed by much more damaging ones in the afternoon or evening. Monday May 30th was no exception, and the morning activity was overshadowed by an outbreak of tornadoes and severe thunderstorms that caused extensive damage in western, central, northern, and northeastern Minnesota. (For other "double-headers" so far this year, see our summaries from May 11, May 12, and May 19.)

Forecasters had been expecting the severe afternoon storms for days, and the for the second time this month, the Storm Prediction Center placed parts of Minnesota in a Moderate Risk for severe weather. Despite its tame-sounding name, a Moderate Risk actually implies an unusually threat level, or a 4 out of 5. The Storm Prediction also issued a rare "PDS Tornado Watch," indicating a Particularly Dangerous Situation. Minnesota had been in a PDS Severe Thunderstorm Watch on May 12th, but no part of the state had been in a PDS Tornado Watch since three counties in extreme southeastern Minnesota were included in one on June 12, 2013. The PDS Tornado Watch on Memorial Day 2022 included 37 Minnesota counties, covering nearly half of the state.

The highly anticipated afternoon storms formed in South Dakota and extreme northwestern Iowa, pinwheeling northeastward into southwestern and west-central Minnesota, affecting many of the same areas that had been hit by intense winds and tornadoes on May 12th. As of this update, the National Weather Service has confirmed over 15 tornadoes in Minnesota from the memorial Day storms, including four that produced EF-2 damage: in Forada (on Maple Lake, just south of Alexandria), in two parts of Elbow Lake, and north of Staples. (During the May 12 outbreak, an EF-1 tornado hit the west side of Alexandria, and Forada had recorded an 87 mph gust.) Other tornadoes were confirmed near or in Milan, Eagle Bend, Elbow Lake, Lester Prairie, Poplar, Hinckley, and Deer River.

Unlike the May 12th tornadoes, some of these had relatively long tracks, with the tornado family that tracked between Milan and the Staples area often having continuous segments of 10-20 miles. These were also extremely fast-moving torandoes, with forward speeds of 60-75 mph.

In addition to the tornadoes, the storms produced intense thunderstorm winds, which once again complicated efforts to differentiate the tornado tracks from non-tornado wind damage. The airport at Appleton, MN, in Lac Qui Parle County, reported a gust of 90 mph. This is just about 10 miles northeast of Madison, which had a 94 mph gust on May 12th. No year since 2014 has had two separate days with 90+ mph gusts recorded somewhere in Minnesota.

The Memorial Day severe weather outbreak did not have the enormous geographical footprint of continuous damage we saw with the May 12 event, but was in some cases more destructive. Debris "sprays" could be seen near the shores of Maple Lake in Forada, near homes that had been stripped apart, de-roofed, and otherwise ransacked by the tornado. Both events were extreme, and on the high end of what we typically expect in Minnesota.