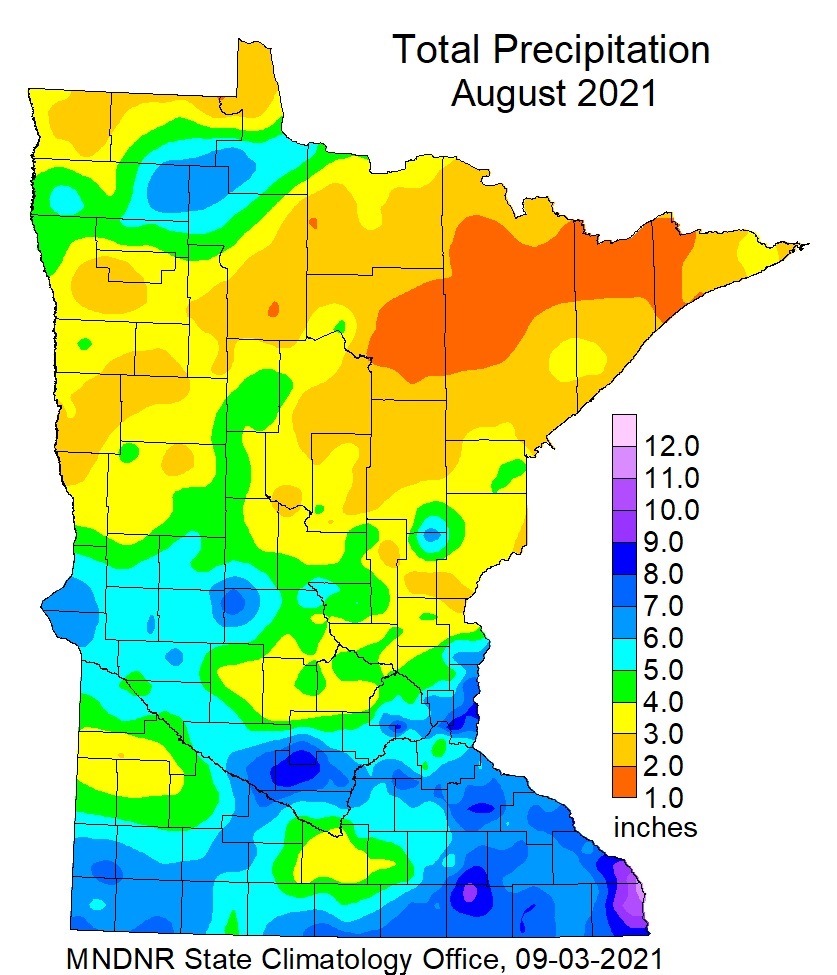 The drought of 2021 expanded and intensified to new heights during a generally warm August, though a late-month soaking helped over half of the state finish somewhat wetter than normal.

Statewide average rainfall was right around 4 inches, averaging about a half-inch above normal, though there was tremendous variation across the state in terms of actual amounts received. In general, precipitation amounts were highest across the south, and well above normal through much of central, western and parts of northwestern Minnesota. The rainfall totals reflect the cumulative effect of several different precipitating weather systems, all of which affected some areas more than others. Therefore, areas of below-normal precipitation could be found even within the generally wet regions, and it is worth noting that most northeastern Minnesota stations finished August below-normal, and in some cases much below-normal, yet again.

The National Weather Service cooperative observer at La Crescent (far southeastern Minnesota) recorded the highest monthly rainfall total, with 11.85 inches. Other high totals included 11.15 inches at Grand Meadow, 11 inches in Winona, 9.34 inches at Hokah (which had led the state with over six inches of rain during July), and 8.92 inches at Caledonia. Eight of Minnesota's nine climate divisions or regions, and all but the northeastern division, had at least one recording station with more than six inches of precipitation. Far from ending the drought, August 2021 nevertheless produced more precipitation than any month since August 2020. Most of this precipitation fell during the end of the month.

Not everyone got relief from the drought during August, however. Deficits were particularly deep in northern and northeastern Minnesota, where monthly totals exceeding three inches were rare, and where many stations received under two inches of rain. The lowest monthly precipitation total from a cooperative observer with complete data was a paltry 1.23 inches at Ely, followed by 1.34 inches at Pokegama Dam and 1.58 inches at Orr.

August also was warm, with that warmth generally reflected more in northern stations than southern ones. The statewide average temperature was 69.4 degrees F, or 2.6 degrees above 1991-2020 normals, ranking this the 14th warmest August on record.

Like July 2021, August was warm without being exceptionally hot, though there was a twist. On one hand, no station in the state recorded a 100-degree F or higher temperature during the month. On the other hand, the state experienced an unusual geographic reversal in patterns of hot days, such that northern Minnesota had more 90-degree days than southern Minnesota. All of the stations with at least eight high temperatures of 90 F or higher for the month were in the northern half of the state, led by Sebeka (Wadena County), which reported 10. By contrast, the Twin Cities station only recorded four 90-degree days, and Rochester reported none.

Despite the wet end to the month, much of the state saw further degradation of drought conditions. By August 10th, the US Drought Monitor had placed part of Minnesota in the highest possible drought category, or "Exceptional Drought" (also called D4), for the first time since the this type of reporting began in the year 2000. The heavy rainfall at the end of the month was nowhere near enough to stop the drought altogether, though it did improve conditions, especially in southern Minnesota. In northern parts of the state, however, precipitation deficits since January of 2020 are now in excess of one foot at many stations,