This entry was created to preserve basic information about the 2021 drought in Minnesota for historical purposes, and will no longer be updated. For real-time drought information, please go here. 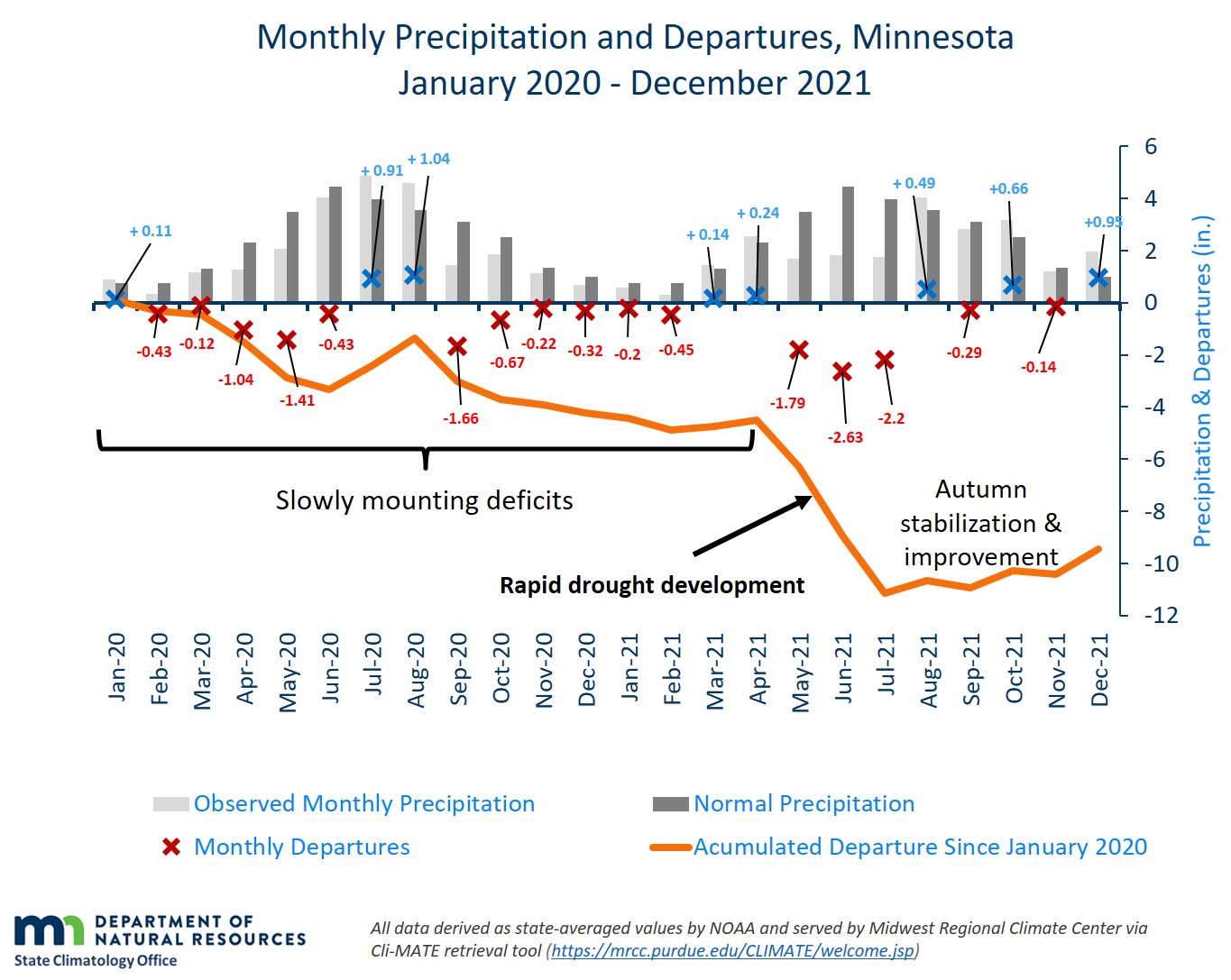 A major drought overtook Minnesota during 2021, as persistent moisture deficits combined with above-normal temperatures across the state. In some parts of the state, the drought was as serious as anything experienced in over 40 years, though for most of the state it was the worst drought in 10-30 years. Although the period of greatest intensification and expansion began during the summer of 2021, dry conditions had been building in many areas during since early and mid-2020.

Following is a basic timeline of the drought's development, spread, and general behavior.

2019 had been a record precipitation year for Minnesota, capping off the state's wettest decade on record. The wet conditions, however, largely ended during the 2019-20 winter, and by February, the state began the first of at least three multiple-month dry spells.

February 2020 precipitation was generally less than half of normal, with smaller deficits in March, but then similarly large ones in April and May of 2020. By the end of June 2020, northeastern Minnesota had recorded its third-lowest precipitation to date (back to 1895), and most areas were in the driest 10% of their records. Despite the significant precipitation deficits, the prior very wet period had buffered Minnesota against major moisture shortages. During June, about 12-20% of the state, from west-central through northeastern Minnesota, was in the D1 category, or "moderate drought," which is the lowest level of drought on the US Drought Monitor. Surrounding that, an additional 25-40% of the state was in the D0 category, or "abnormally dry," which can be thought of as a "pre-drought" condition. The remaining half or so of the state had no categorization on the US Drought Monitor.

Mid-summer 2020 was often quite wet, with several significant rainfall events including one "mega-rainfall" in late July. July and August together wound up among the 10 or 15 wettest on record for northwestern, western and central Minnesota. The frequent and occasionally heavy precipitation prevented drought conditions from expanding during critical parts of the growing season, although the western and northeastern edges of the state remained in US Drought Monitor categories through the summer. During early and mid-July, an area accounting for around 5% of the state, centered on Duluth, actually went into D2, or "Severe Drought."

Dry conditions resumed on a statewide basis during September of 2020, when many areas received less than half of normal precipitation, and the state averaged just 1.46 inches, versus a normal value of 3.12 inches. Thus began a six-month run of statewide precipitation deficits, during which the state missed about 35% of its normal precipitation. Winter is Minnesota's dry season, so these shortfalls only amounted to an average loss of of about 3-4 inches of precipitation, and had the effect of reversing any gains that had been made during the wet July and August period. After winter, Minnesota had a slightly larger long-term precipitation deficit than it had seen at the beginning of the 2020 summer. By the end of February 2021, all of Minnesota was at least in the D0/Abnormally Dry category, and about 25% of the state, covering the southwest, far west, northwest, and northeast, was in Moderate Drought. During this time, climatologists and hydrologists began expressing concern that without abundant early growing season precipitation, drought conditions would expand and intensify across the region.

Both March and April of 2021 ended up being slightly wetter than normal on a statewide-averaged basis, but both months were uneven in their distribution of precipitation across the state. March precipitation, for instance, was 150 - 200% of normal in southern, eastern, and northeastern Minnesota, but just 5 - 25% of normal in northwestern areas. April, on the other hand, was generally quite wet in the north, but dry in the south. Most areas gained just enough ground against the mounting precipitation deficits during this time, that by the end of April, only about 15% of the state was in designated drought, and over 60% of the state was in no category on the US Drought Monitor. Minnesota's generally low coverage of drought was in jeopardy, however: through April 2021, the average Minnesota location was short 4.5 inches of precipitation, and it was clear that a prolonged period of dry, and especially warm and dry conditions, could cause drought conditions to expand and intensify rapidly in the state. 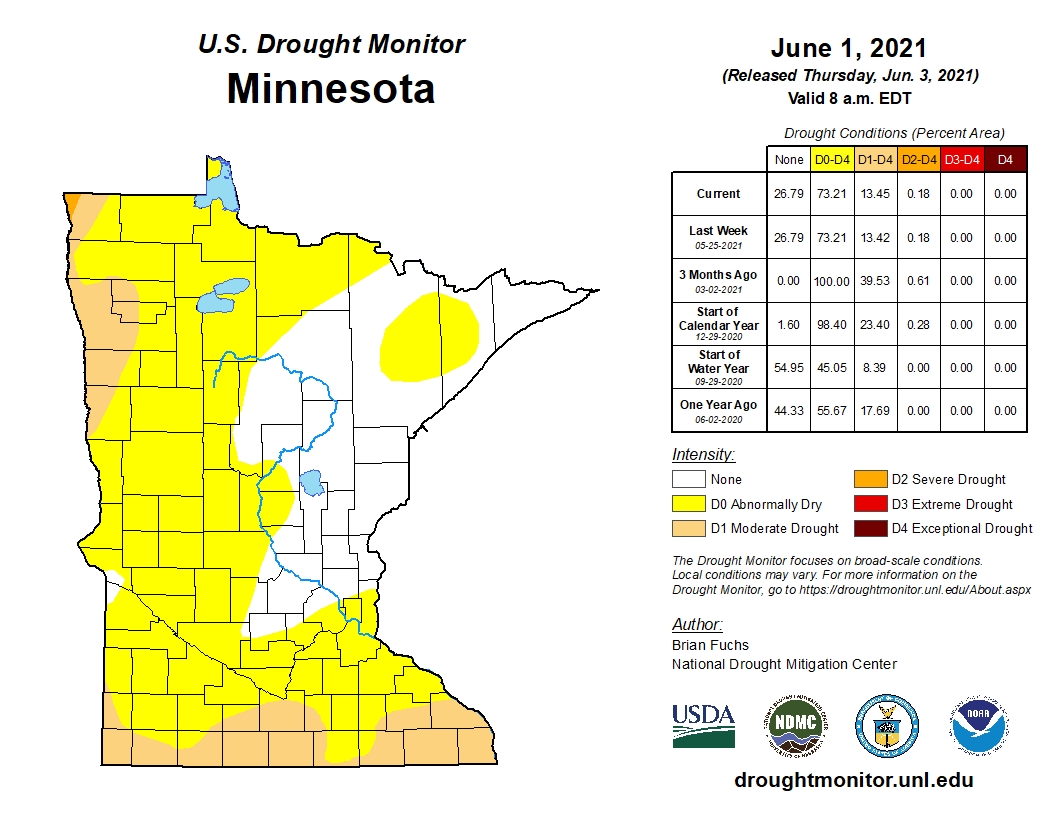 Drought Acceleration: May Through mid-August 2021

The dry conditions resumed indeed during May, with most of northern Minnesota receiving under 1.5 inches of rain (normal is around 3 inches), and 18 counties receiving under an inch. It was one of the ten driest Mays on record throughout northern Minnesota, and the state as a whole finished 15th driest, out of 128 years. Fortunately, the temperatures were only slightly above normal. The coverage of official drought did not change much during the month, but the area of Abnormally Dry conditions (D0) nearly tripled in size, from covering 21% of the state on May 4th, to covering 60% of it on May 25th.

Drought conditions expanded aggressively across Minnesota during June, thanks to an extraordinary early-summer heatwave, along with a continuation of very dry weather. It was Minnesota's third warmest and seventh driest June on record. Stations throughout the state recorded 10 or more 90-degree days during the month, while averaging a mere 45% of normal precipitation.

The area of Moderate Drought or greater expanded by over 500%, from 13% coverage at the beginning of June, to 71% coverage by month's end. Severe Drought (D2) emerged in northwestern and southern Minnesota, occupying over 10% of the state by the end of June.

In July, the extremely dry weather continued, with the month finishing second driest on record on a statewide basis, and driest on record in many northern Minnesota counties. Once again, most areas received lass than half of their normal precipitation. July was warm also, but lacked the heat extremes the state experienced during June. On July 6th, Severe Drought (D2) had expanded to account for 40% of the state; by the end of the month it had nearly doubled again to 75% coverage. Extreme Drought (D3) accounted for 4% of Minnesota in mid-July, and  blossomed to 22% coverage by the end of the month. 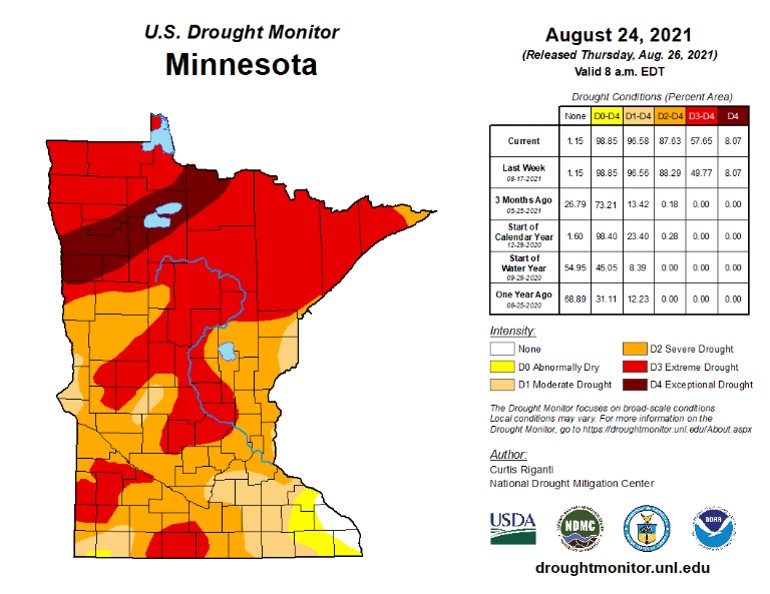 US Drought Monitor Map from August 24, 2021, during the height of the 2021 drought.
Courtesy: National Drought Mitigation Center, University of Nebraska

Conditions continued deteriorating in first 2-3 weeks of August, with the precipitation shortfalls growing further over all but southeastern Minnesota. By August 10th, a swath of northwestern through north-central Minnesota was designated in Exceptional Drought (D4), marking the first time any part of the state had made it to that level of drought during the 21-year history of the US Drought Monitor. By mid-August, 8% of the state was designated in Exceptional Drought, and an additional 42% of the state was in Extreme Drought, and this condition continued into the final week of August.

Improvement begins: late August through the end of the year

A two-week wet period in late August, did at least slow down the drought's intensification and began a prolonged period of stabilization and improvement. All but northeastern Minnesota had at least two inches of new precipitation, with many areas receiving three or more inches of rain during that time. Additional rains of 1-2 inches fell over southern, and especially western Minnesota September 2nd and 3rd. Northeastern Minnesota received scattered totals of over an inch between September 6th and 10th, thanks to numerous isolated afternoon showers and thunderstorms. Additional precipitating weather systems affected parts of the state during the month, particularly in the central and north, leading to further improvements in drought conditions and general reductions in the US Drought Monitor categories.

September ended up finishing slightly drier than normal on a state-averaged basis, with significant shortfalls in the far southeast, and an even split between above and below-normal rainfall over the rest of the state.

November 2021 saw slightly below-normal precipitation on a statewide basis, with some northern areas quite wet, but much of southern and southwestern Minnesota quite dry. 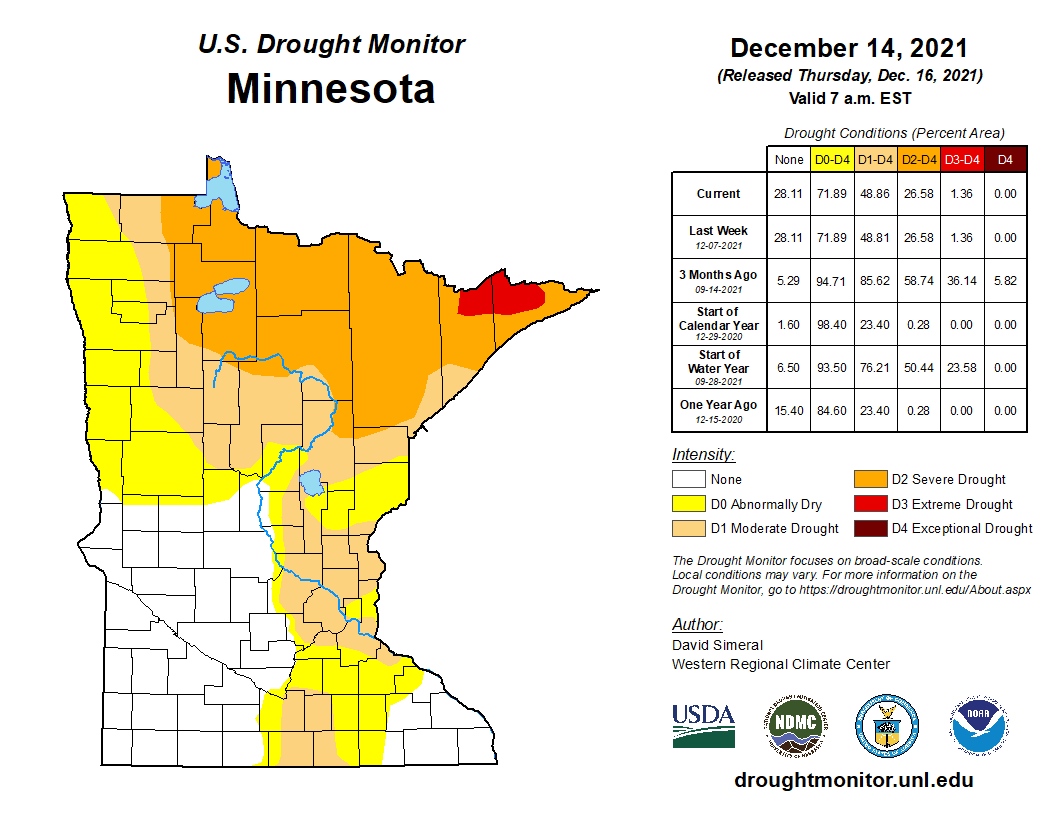 US Drought Monitor Map from December 14, 2021, when drought remained over about half the state but significant improvements had occurred also.
Courtesy: National Drought Mitigation Center, University of Nebraska

December 2021 finished as the second wettest on record on a statewide basis, with all but a sliver of extreme south-central Minnesota finishing above normal. The month was marked by three significant precipitation during the first three weeks of the month, giving month-to-date precipitation a huge boost over most of Minnesota. Only extreme north-central into northwestern Minnesota was running dry for the month as of December 20.

The late summer, autumn, and early winter precipitation helped chip away at the drought, with the state becoming free from the Exceptional category during September, and with most of the state seeing steady improvements and reductions in areal coverage of drought categories. By mid-December 2021, slightly less than one-half of the state remained in official drought designation (drought categories 1-4), and over a quarter of the state was free of any designation whatsoever--not even in D0, or "abnormally dry" conditions. Over a quarter of the state, in northern and northeastern Minnesota remained in Severe Drought, and a small part of northeastern Minnesota remained in Extreme Drought. By the end of December, Minnesota became free of Extreme Drought.

Precipitation remained near normal on a statewide basis during January.