Division of Ecological and Water Resources 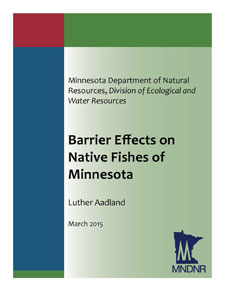 by Luther Aadland documents the effects of barriers on native fish communities in Minnesota by evaluating fish presence/absence above and below 32 barrier dams throughout the state.

To evaluate the effects of barriers on aquatic biodiversity, fish distributions upstream and downstream of 32 barrier dams on the mainstem or tributaries of the Mississippi, Minnesota, St. Croix, St. Louis, Missouri, and Red River of the North were assessed. Recolonization was assessed for eleven dams that were subsequently removed and had adequate post removal surveys. On average, species richness declined by 41% for complete barriers, 37% for near-complete barriers and 20% for barriers that are/were inundated at bankfull flows. A detailed assessment of the Cottonwood River Watershed indicated that a single barrier near the mouth of the river caused a watershed-wide loss of species richness.

Subsequent removal of 11 barriers resulted in upstream recolonization of an average of 66% of the species that had been absent. Removal also resulted in substantially higher catch per unit effort for a number of species, suggesting that an impact of fragmentation is reduced abundance of remaining riverine species. Removal of the Appleton Dam on the Pomme de Terre River resulted in recolonization of elktoe, deertoe, and plain pocketbook mussels; species that had been found only as dead shells in surveys prior to the dam’s removal. These findings suggest that barrier dams, while often ineffective for control of common carp, are among the most profound and definitive causes of native biodiversity losses in Minnesota waters.