This eagle camera is brought to you by the Minnesota DNR Nongame Wildlife Program, which helps over 700 species of Minnesota wildlife thrive. The program is largely supported by donations from people like you.

August 25, 2022
And that’s a wrap! Thank you for watching the MNDNR EagleCam. The camera is off for the rest of the season.  For highlights from the 2021/2022 season, take a look at our newsletters on this page or visit the Nongame Facebook.

Tune in this fall when we return to watch our amazing bald eagles begin their courtship and nesting season on November 17, Give to the Max Day. Don’t forget to check the box on your Minnesota Tax forms and make a donation to the Nongame Wildlife checkoff to help keep the camera running and our program. Thank you for a great season!

Eaglets typically fledge around 12 weeks. E1 is a little over 13 weeks, so she’s right on schedule. She has been testing her wings, jumping higher and higher in the wind gusts. She has displayed good stability and capability to jump high with her wings out and land back in the nest. This is a great sign of strength and flight control that bodes well for her coming adventures!

For the next few weeks, E1 will likely leave the nest for longer and longer flights. The adult female will demonstrate hunting techniques, but will continue to provide E1 food on a less frequent basis.

E1 is getting stronger every day. She continues to try out her wings by flapping and stretching on a regular basis. She is preening to rid herself of some of the old feather coatings and is losing more down as her feathers grow long and strong for flight.
There have been other eagles visiting the nest that the female has fought off since her partner disappeared.  One immature eagle has been particularly persistent in hanging around the nest.  It appears to be a three-year old bird that will not a suitable mate until it reaches five years of age (if it is a male). The visitor seems to be curious and not a threat to E1 and her mom. Since there doesn't seem to be a threat from this bird, we think the female is reserving her energy and has allowed it to hang around. It isn't stealing food or attacking either of our eagles, so it is being tolerated for now.
Read (and sign up for) the latest newsletter for the full update!

The surviving female chick on our nest is getting stronger by the day. She continues to try out her wings by flapping and stretching on a regular basis. She is preening to rid herself of some of the old feather coatings and is losing more down as her feathers grow long and strong for flight.

The adult female has been on her own for well over a month now, and the chick is still dependent on her for food. Even with only one chick to care for she is still a busy bird. She has to hunt and defend the nest and territory by herself. This takes up most of her time, but she is always nearby to watch over her chick.

There have been other eagles visiting the nest that the female has fought off since her partner disappeared. One immature eagle has been particularly persistent in hanging around the nest. It appears to be a three-year old bird that is not a suitable mate, that is until it reaches five years of age (if it is a male). The visitor seems to be curious and not a threat to E1 and her mom. Since there doesn't seem to be a threat from this bird, we think the female is reserving her energy and has allowed it to hang around. It isn't stealing food or attacking either of our eagles, so it is being tolerated for now.

E1 is now about 10 weeks old now. At this age, chicks are not fed as often. The chick is getting at least one meal a day and usually consumes all of the prey in one sitting. The extra nutrition she is able to consume is stored in her crop until the next feeding. We know she is thriving, because she is hitting all of her developmental milestones. She is branching (sitting on nearby branches), she is preening, stretching and flapping to strengthen her wing muscles. These behaviors prove that she is getting plenty of food, or none of this would be happening. Her bursts of wing flaps are becoming more frequent and vigorous as she prepares for first flight.

Eaglets take flight for the first time between ten and thirteen weeks. E1 is a large, strong female, so it could be any day that she decides to leave the nest. As she will continue to be dependent upon her parent for food, she might return to the nest from time to time to beg. Once she takes her first flight, her parent will show her where to find prey, how to hunt and catch her own food and eventually how to soar. Keep watching to witness the amazing beauty of the eagle chick taking wing.

Today, with the voluntary services of Xcel Energy and bird bander Mark Martell, we were able to band the chick today. The perfect weather made it possible to take video and pictures so kids and adults can see what it is like to be a raptor biologist, to work for Xcel Energy, or to become a wildlife photographer.

E1 was estimated to weigh about 9 pounds! The measurements suggested the chick is a female. The only definitive way to determine sex is with a blood sample, which we did not take today.  She received new jewelry, a band on her right leg, which will help us to identify her in the future if the eagle is injured or found dead, her location data is now stored at the National banding laboratory in Laurel, Maryland. She was fed a fish just before banding, and something unidentified after banding.  All is well in the EagleNest tonight.

On Saturday, April 30 at about 1 p.m., the younger chick was pushed out of the EagleCam nest by its sibling. Nongame staff were contacted and retrieved the chick from the ground as soon as we were made aware of the incident. The nest is roughly 75 feet high.  The young eagle was able to be quickly brought to the veterinarians at The Raptor Center for care. Because of the very poor prognosis due to the complex fracture and severely progressing signs of internal trauma, the young bird was humanely euthanized to alleviate suffering. On May 2, his avian influenza pcr test came back negative.

The male parent has been missing for a week (since April 26). Siblicide can happen when resources are scarce.  Because of the male’s absence, the female was struggling to feed herself and the two chicks. Neither chick had been fed for two days when the chick was pushed from the nest.

The microphone at the nest is faulty. A replacement arrived too late to install this season. The eagles cannot hear the clicking noise, but it can be bothersome to hear when watching. We suggest muting your sound until next season.

Don’t forget to sign up for updates here and to donate on your state tax forms or online. Thank you to our loyal fans and followers!

The Nongame Wildlife Program helps protect and preserve thousands of Minnesota’s wildlife species. In addition to our conservation work, we also engage in outreach and education so that Minnesotans can learn about their wildlife. The EagleCam is one of our best tools for brining Minnesota’s wildlife to everyone. And your donations help keep it running!

When filling your taxes, please consider making a tax-deductible donation via the nongame tax checkoff. You can also donate online anytime. All donations are double-matched and help us continue our legacy of helping Minnesota’s wildlife. We sincerely thank you for any amount you give, it all makes a difference in the life of Minnesota's animals!

We thank you again for all of your generous contributions to the Nongame Wildlife Program so we can continue to bring this amazing view into the lives of Minnesota bald eagles.

We'd also like to thank our partners in this webcam adventure: Floyd Security and Xcel Energy.

Rewind video for instant replay: Click anywhere on the red timeline bar below the image to go back up to 4 hours. Click on the "LIVE" button to return to the live feed. Make the video full screen by pressing the double arrow in the lower right. To escape from full screen, press the ESC key, or tap "Done" on your mobile device.

Note to viewers: This is live video of wild bald eagles living in nature. Natural struggles will occur and some of the feeding or other wild bird behaviors may be difficult to watch. Please use discretion when watching this cam. DNR staff monitor this camera and nest.

View the latest EagleCam newsletters. These are sent regularly to subscribers during the EagleCam season.

Learn more about the EagleCam

Are the adult eagles male or female?

The only visible physical difference between adult male and female American Bald eagles is their size. Females are about 1/3 larger than the males - the females have especially larger feet and beaks. Both parents incubate the eggs and switch several times a day. With this pair, the female appears to have a brighter, whiter head than the male.
Learn more about eagles »

See How They Grow! 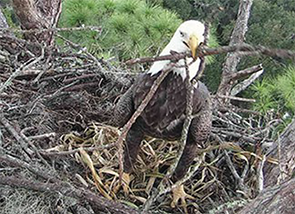 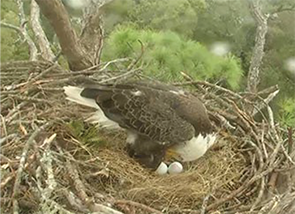 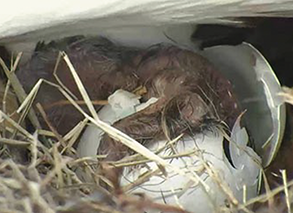 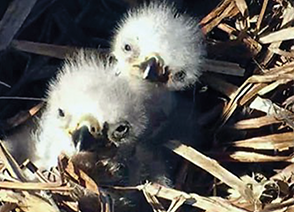 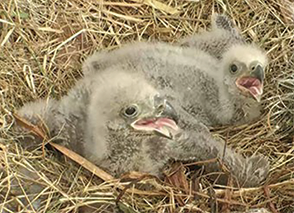 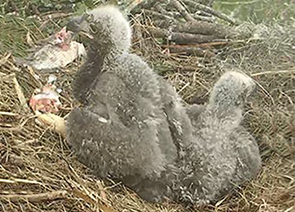 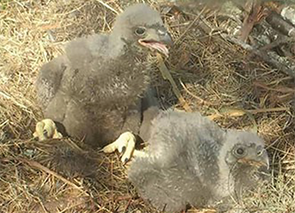 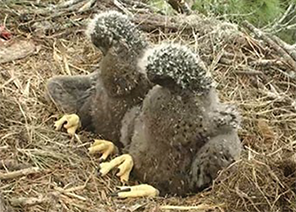 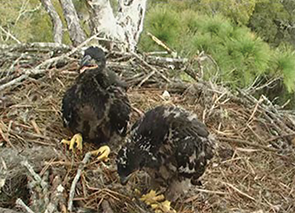 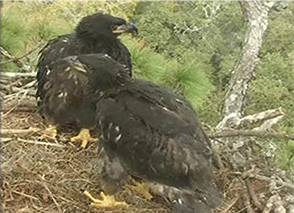 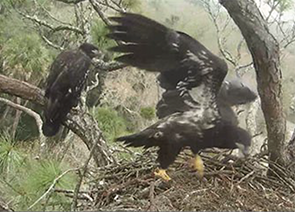 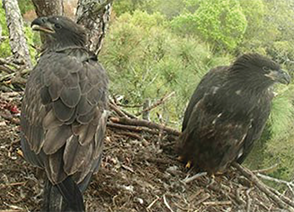 View happenings that we have captured in the nest this season.

Male repels a raccoon climbing into the nest

Once pushed to the brink of extinction, the Bald eagle has made a powerful comeback since the pesticide DDT was banned in the early 1970s. Minnesota has more Bald eagles than any other state in the lower 48 states.

An eagle camera is a great way of getting a close-up view of nature without even leaving home. But if you live in the Twin Cities or elsewhere in Minnesota, there are lots of places outdoors such as state parks where you can watch eagles and other wildlife, and do fun things like catch fish, paddle a canoe, and more.