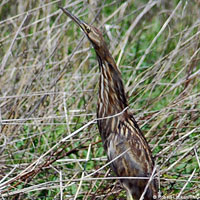 The American bittern is an avian chameleon. It blends so well into the thick vegetation of the freshwater marshes in which it breeds, that humans often pass by without spotting it. Its black-flecked brown plumage fades into its surroundings as it stands with its bill pointed up, remaining stock still to imitate a stick or gently swaying to mimic wind-rustled reeds. Even the bird’s resonant oonk-a-lunk song, sometimes compared to the sound of a stake being driven into the mud with a mallet, blends into the bullfrog chorus. Those fortunate enough to spot an American bittern usually have the opportunity at dusk or dawn when the bird flies over the marsh. A large and stocky heron, the bittern is a slow bird, stalking its prey with glacial patience. It usually hunts fish, but also devouring other common marsh residents like frogs, small eels, water snakes, insects, salamanders, crayfish, and small rodents.

Breeding throughout the southern Canada and the northern United States, the American bittern typically migrates north in March and April. Raising one brood each year, the female bittern incubates 2-7 eggs for 24-29 days. Fed by both parents, the hatchlings remain in the nest for 14 days. They may live as long as 8 years. American bitterns return south from late August to November. They winter along U.S. coasts south to southern Mexico.

In Minnesota, the bittern is most common in the state’s north west, but the elegant courtship displays of March and April are increasingly rare sights. The North American Breeding Bird Survey suggests that American bitterns have declined 4.9 percent annually since 1966, though accurate population estimates are problematic because of the bird’s secretive nature. As the wetlands on which the bird relies are drained, filled, and converted to agriculture, the species, like many wetlands inhabitants, declines. Although the bittern remains widely distributed, populations are declining across its range. As with other birds that rely on this endangered habitat, the American bittern is a Species of Greatest Conservation Need in Minnesota because its decline is linked to that of its habitat.