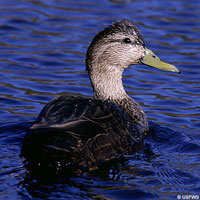 Though charcoal brown, not truly black, the American black duck is the darkest dabbling duck on the water. Well known for its wariness, it is one of the quickest ducks into the air when disturbed. They can take to the wing instantly and fly to safety as fast as 25 mph. A summer resident in Minnesota, the ducks migrate north from their wintering grounds along rivers in the eastern half of the United States between March and mid-May. They depart the state between October and November. Mostly found breeding in the northern boreal forests of the state, the black duck nests in sedge meadows and bogs. It is often seen in wild rice beds where it feeds heavily on the ripe grains. When foraging for deeper aquatic plants and insects, groups will often dip tail-up in unison like a water ballet team. The female incubates her single brood of 6-12 eggs for 23-33 days. Hatchlings are precocious, and leave the nest with the hen within a few hours of hatching.

Once an abundant duck in eastern and central North America, the American black duck population has declined across its range, including in Minnesota, although populations have been fairly stable for the past 2 decades. Though there are over 1 million American black ducks remaining, populations dropped severely from 7 million in 1955 to 3 million in 1985. Regulated hunting is not likely a factor, rather, the expanding breeding range of mallard ducks is the species’ main threat. Black ducks will hybridize with Mallards, which also replace them entirely in non-forested areas. Like all wetland species, the black duck is also threatened by destruction and degradation of its habitat, and global climate change may be the greatest long-term concern. The species is Threatened in Wisconsin and is a Species of Greatest Conservation Need in Minnesota because of its rarity. The 1991-93 Black Duck survey estimated that fewer than 1,000 black ducks remained in the state.