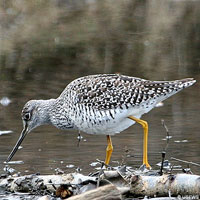 About a third larger than the very similar lesser yellowlegs, the greater yellowlegs is a common shorebird. Though none reside in Minnesota, they are a common sight during their migrations. Breeding in the taiga forests of Alaska and Canada, they winter along coastal areas from the southern United States to South America. Usually nesting near water, both parents incubate one annual brood of 3-4 eggs for 23 days. Hatchlings first fly after 18-20 days. The Great Lakes are an important staging ground during migration. The birds usually appear in Minnesota between mid-April and mid-May and again from late June to late November, foraging and resting in small groups at the edges of ponds, rivers, lakes, and other wetlands.

With legs longer than many other shorebirds, the greater yellowlegs wades into comparatively deep water to hunt, pecking at or skimming the water with its thick bill. Sometimes several birds will wade abreast of one another, forming a surprisingly well organized interception line for prey. Greater yellow legs usually prey on fish, sometimes also taking frogs, insects, crabs, or snails. Commonly seen feeding among herons and egrets, the bird is well-known for its tendency to comically dash after small fish.

Though the greater yellowlegs remains widely distributed and common and its populations are increasing, it is considered a high priority in Bird Conservation Regions Shorebird plans. It is a Species of Greatest Conservation Need in Minnesota because it depends on threatened habitat. The wetlands habitat on which it relies during migrations and in winter have been widely degraded and destroyed. Over one half of the original wetlands in the lower 48 states have already been destroyed, and they continue to be steadily drained for development.