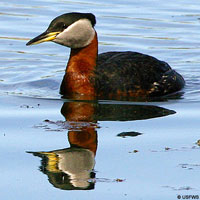 Slightly smaller than the western and Clark's grebes, the red-necked grebe may be distinguished by its thick neck, chunky head, and white patches along the leading and trailing edges of its wings. Its namesake, the chestnut neck, is only present in its breeding plumage, turning dusky in the winter. Breeding from Alaska southeast to the Great Lakes, the grebe nests in shallow water on lakes and ponds. It usually arrives in Minnesota between March and May and departs from July through November. The bird winters along both coasts. On the west coast, it winters from Alaska to southern California. On the east coast, it winters from Nova Scotia to central Florida.

The red-necked grebe spends almost its entire life in the water. When not migrating, it rarely flies, and it almost never hauls out on land. Even nests are aquatic, floating or anchored in shallow water. Both parents incubate the 2-6 eggs for 20-23 days. Hatchlings are slow to fly, first taking to the air after 49-70 days. When feeding, the grebe submerges in a long, graceful dive as deep as 30 feet, preying on aquatic insects, small fish and crustaceans.

Although there are likely more than 45,000 red-necked grebes in North America, populations have declined in recent years. Historical information on red-necked grebe populations is scarce, so it is difficult to accurately estimate the severity of their decline. In Minnesota, they are a Species of Greatest Conservation Need because they are uncommon and their lake and wetlands habitat is in serious decline. In its breeding range, pesticides and increased raccoon predation hamper its reproductive success. Oil spills and other pollutants threaten it in its winter marine habitat. As with many other wetlands residents, the gravest threat to the species is the destruction and degradation of its habitat by lakeshore owners.