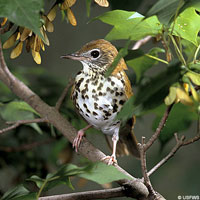 In early spring, the fluting eee-o-lay song of the wood thrush resounds throughout the moist woodlands at dawn and dusk. In Minnesota, the bird nests throughout the state, except on the prairie and in the heavy coniferous forests along the Canadian border. It is partial to woodlands with swamps or streams. A heavy-bodied large-eyed bird, the wood thrush is easily recognized by its white eye-ring and light belly marked with black oval spots. A shy denizen of the woods, the bird is usually found alone or in pairs, foraging on the ground or low in trees. It feeds primarily on insects, spiders, and fruits. In Minnesota, the spring migration peaks around mid-May. Typically raising two broods each year, the wood thrush lays 2-5 eggs, which are incubated for 12-14 days. Young remain in the nest for 12 days and may live as long as nine years. It departs for its wintering range in eastern Mexico to Panama between August and October.

Although the wood thrush enjoys a wide range and globally healthy populations, the species is in a long-term decline. According to the North American Breeding Bird Survey, wood thrush populations have declined 29 percent since 1966. It is a Species of Greatest Conservation Need in Minnesota because it is vulnerable to habitat loss and associated threats. Forest fragmentation destroys the woodlands in which it nests and forages. The second and related threat is brood parasitism by brown-headed cowbirds, especially in the Midwest, where rates of parasitism are as high as 90 percent. Originally adapted to following the movements of bison herds, brown-headed cowbirds now lay their eggs in the nests of other forest and grassland species. The fledglings often out-compete their legitimate nest mates or cause the nest to be abandoned. The brown-headed cowbird is an “edge” species that typically inhabit areas where two habitat types meet. Forest fragmentation creates more edge habitat, increasing cowbird populations and thus nest parasitism. Preserving large blocks of intact forest is the key to protecting the wood thrush.