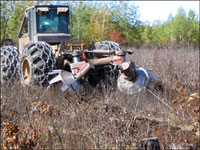 The disc trencher is a continuous double row scarifier. The discs that do the trenching are basically an adaptation of agricultural discs. There are several makes of disc trenchers available in North America including the T.T.S., the C.F.E. and the Equisyl. The T.T.S. is commonly used in Minnesota.

Sites that have medium moisture content are best for the disc trencher. It should not be used on sites that are wet. Disc trenchers can be pulled through light and medium slash. Heavy slash will greatly reduce disc trencher effectiveness. Shallow soils underlain with rocks can not be effectively site prepared with this tool. It is suggested that silt loam and coarser soils be treated with the disc trencher.

A disc trencher has two rotating, spring loaded discs, each with approximately 10 teeth on its perimeter. The discs are mounted on each side of a steel box frame. The discs face outward and forward on the frame. Models are available with freely rotating discs or power driven discs. Disc trenchers weigh from 2¼ to 3½ tons, are about eight feet wide and seven feet long. They requires a prime mover, either a crawler or a skidder, of 120 hp. or more.

When pulled through a reforestation area, the discs rotate outward forming two parallel furrows approximately six feet apart. To the outside of each furrow, side cast material forms a loose berm containing organic matter, mineral soil and slash. Furrows are about six inches deep but can be made deeper by adding weight to the machine or by changing the angle of the discs. Some models provide downward pressure from the prime mover which will also deepen the furrow. The models that have power driven discs can go through more material and provide a deeper furrow than the freely rotating disc models.