How to catch a channel catfish

The channel catfish is an exciting sport fish and tasty table fare that is becoming increasingly popular with Minnesota anglers. Channel catfish can be found in large and small rivers, lakes and ponds. In Minnesota, they are common in the Minnesota River, Mississippi River, St. Croix River and the Red River of the North. If you have never tried fishing for channel "cats" now is a good time to start.

Generally, a year-round season but check the fishing regulations based on where you want to fish. Some waters have special regulations for channel catfish. 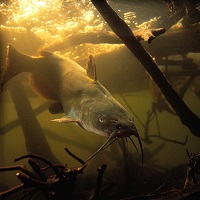 Many great catfish destinations exist throughout Minnesota, and the Red River of North is truly a national treasure. The Red is one of America's premier channel catfish angling destination because of its abundance of 20-pounders and the occasional giant that grows up to 30 pounds.

Though channel and flathead catfish coexist in large, slow rivers, the channel catfish takes to smaller waters as well, sharing many riffled streams with walleye and smallmouth bass. The channel catfish originally inhabited the Mississippi River only below St. Anthony Falls but in recent years has been introduced as far upstream as St. Cloud.

A common catfish rig is a sturdy rod-and-reel loaded with 15- to 20-pound test line. Thread the line through a one-ounce egg sinker. Next, tie a barrel swivel to the line. Now, tie about two feet of heavy monofilament or fluorocarbon line to the other end of the swivel. Finish the job by tying a 6/0 or 4/0 circle or bait hook to the other end.

Bait the hook with a nightcrawler, chicken liver or cut chunks of minnow or other legal bait. Commercial “stink baits” sold at retail outlets are a good option too because catfish primarily find their food by using their taste and smell senses.

Channel catfish feed primarily at night, which is the best time to catch them. They can be caught from either a boat or shore. Fishing with a group of friends for catfish on the shore of a river is a great way to spend an evening.

If you're ready for a different way of fishing, try your hand at catfishing. 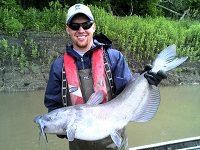