How to catch a flathead catfish

The inland fishing season opens in early April and closes in late November. The opening and closing dates vary for lakes and rivers that border North Dakota, South Dakota, Canada, Iowa and Wisconsin.

Check the fishing regulations based on where you want to fish. Some waters have special regulations for flathead catfish.

Flathead catfish fishing tends to be best in summer. During winter flatheads seek deeper water where boulders or logs provide refuge from current. There they remain through the winter, so torpid that they may be covered with a fine dusting of silt.

Times of lower light conditions – dusk and dawn – are good times to fish. So are rainy and overcast days as flatheads prefer low light conditions and spend most daylight hours in the shade of a tree or rock or other type of cover. 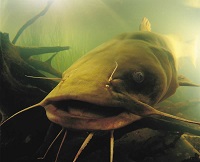 Minnesota's flathead catfish live in the southern part of the state, largely in the Mississippi River below the Coon Rapids dam, the St. Croix River below Taylors Falls and the Minnesota River.

A good place to start on the St. Croix River is near the town of Stillwater. Fifteen-pound flatheads are relatively common in this area. Similarly, Pool 2 of the Mississippi River – that portion between the dams at St. Paul and Hastings – is a good bet.

In the southwest, flatheads exist only below the Minnesota River Granite Falls dam. July and August are perhaps the best months to fish for trophy flatheads because they have just completed spawning. A great place to catch one- to two-pound eating-sized channel catfish is upstream of Montevideo.

Good fishing often exists where you find submerged timber, especially rootwads. Catfish like to be in areas where the water is relatively deep compared to the rest of the area and baitfish are plentiful. If this area has only moderate or low current that is even better.

The flathead feeds primarily on other fish using its sense of smell and ability to detect vibrations through its lateral line. At night it may more actively feed or even forage in shallow riffles.

A common catfish rig is a sturdy rod-and-reel loaded with heavy line of at least 30-pound test or more. On rare occasions a flathead will grab an artificial lure but usually they are caught on large live baitfish or gobs of nightcrawlers lowered into deep pools or heavy cover. Flatheads usually shun the dead baits and “stink baits” that are popular for channel catfish.

Flatheads can be caught from either a boat or shore. Fishing with a group of friends for catfish on the shore of a river is a great way to spend an evening. 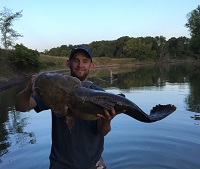