How to catch a lake sturgeon

The lake sturgeon is Minnesota's largest fish, and oh what a fish it is. This species can grow to more than 100 pounds. Moreover, big sturgeon are increasingly common in Minnesota. The Rainy River, for instance, holds nearly 100,000 sturgeon 40 inches or longer. Put head to tail, that is a string of fish more than 60 miles long. If you have never fished for lake sturgeon now is the time to try. Sturgeon fishing is the best it has been since the late 1800s.

Sturgeon fishing season dates vary depending upon whether you are fishing on inland waters or waters that border another state or Canada. Check the fishing regulations based on where you want to fish. Some waters have special regulations for sturgeon.

That said, the state's most popular sturgeon fishing destinations are Lake of the Woods and the Rainy River, which offer both a catch and release season and a harvest season in which you can keep one fish per calendar year. The harvest season runs from late April until early May and early July until late September. The catch and release season runs from early May until mid-May and early October until late April. This means from the second half of May until the end of June you cannot fish for sturgeon fishing. The rest of the year, you can fish for sturgeon.

There are some additional regulations that apply to sturgeon regarding tagging, possession and transportation.

Lake sturgeon exist in Lake of the Woods, Lake Superior and many rivers, including the Rainy, St. Croix, St. Louis, Kettle and Red River of the North. You can search LakeFinder on the Minnesota DNR website to determine if lake sturgeon are in a lake or river near you. The lake sturgeon isn’t a common fish but it has expanded into many new waters over the past 30 years as part of a major recovery effort. 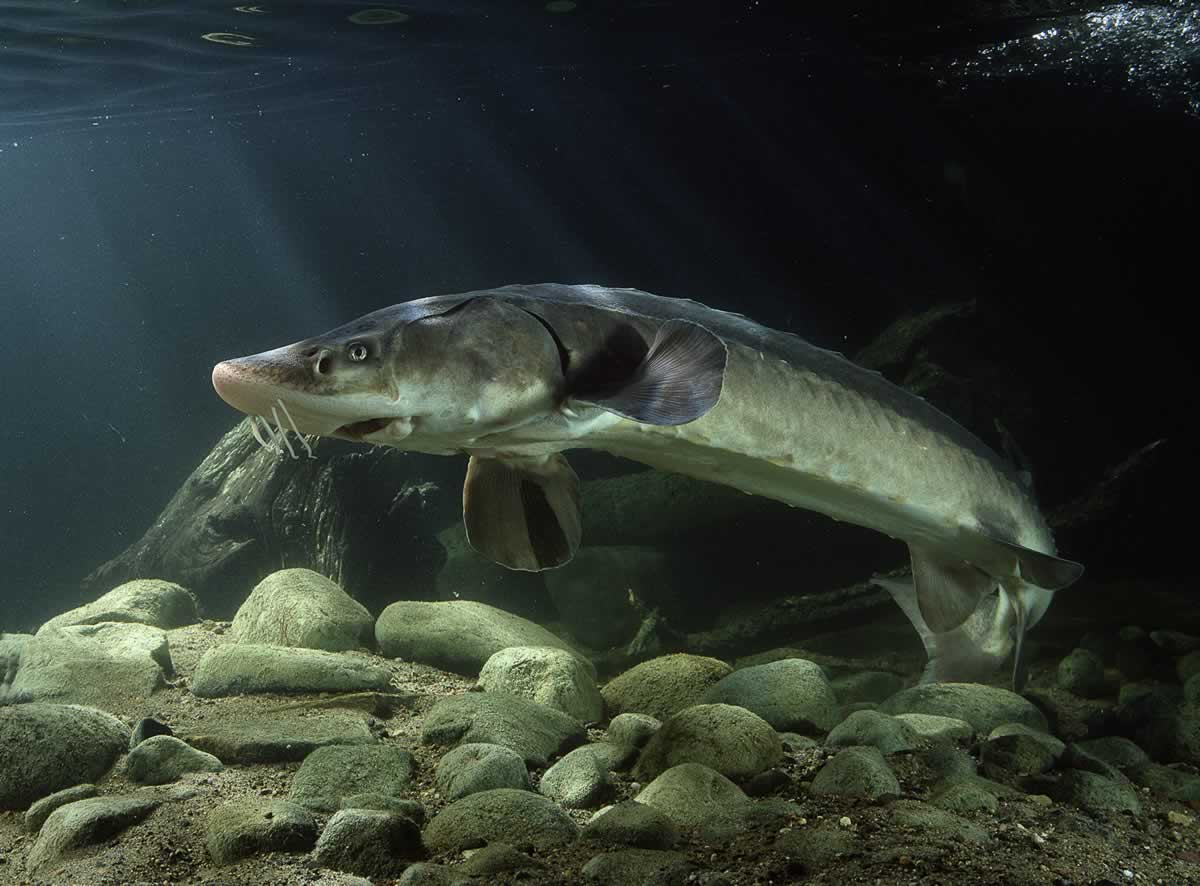 Sturgeon fishing is pretty simple. It’s simple because basically all you do is drop live bait to the bottom then wait for a bite.

A typical sturgeon fishing outfit begins with a stout muskellunge rod. Add to that a level-wind reel loaded with braided line in the 80- to 100-pound test range. Next, thread your line through a heavy slip sinker. Many sturgeon anglers prefer “no-roll” slip sinkers in the one- to five-ounce range. Use just enough weight to keep your bait on the bottom. After you have threaded your line through the sinker tie a strong barrel swivel to the line. This will keep the sinker from sliding down to the hook. Next, tie about 12 to 18 inches of line onto the other end of the barrel swivel. This is your leader. Finally, tie a 5/0 circle hook onto the other end of the leader. Now you are set.

Most anglers fish with one or more nightcrawlers on the hook, and many also like to add a minnow or two for good measure. Once you feel a bite simply tighten the slack from your line and raise the rod, thereby allowing the circle hook to catch. Then hold on. You may be fighting a fish for 10 minutes or more. A stout rod with heavy line is best because it allow you to pull in the fish quicker, which means less stress exhausting on the fish.

Typically, sturgeon anglers who fish from boats look for pools or deeper seams in the river bottom. Then, they anchor slightly above these areas and allow their bait to settle into them. They do this because sturgeon often “hole-up” and when they do start to move upstream they often leave by swimming upstream from the head of the pool.

As mentioned above, the gear you’ll need for sturgeon fishing is similar to what you would use for muskellunge fishing. Important things to have include: