How to catch a largemouth bass

The largemouth bass is one of Minnesota's favorite sport fish. Common in more than half of the state's fishing lakes and many rivers, its popularity has much to do with its wide prevalence throughout the state, abundance in most lakes and scrappy resistance once hooked. Largemouth bass can be caught from docks and fishing piers. If you have never fished for largemouth bass you should. They are surprisingly strong and can be downright acrobatic.

The largemouth bass season opens in mid-May and continues into February. The opening and closing dates are the same as the walleye and northern pike seasons but bass fishing has a slightly different twist.

On opening day an early bass harvest season begins north and east of U.S. Highway 53 from Duluth to International Falls. In the rest of the state opening day is the beginning of a two week catch-and-release only season. The harvest season starts on the Saturday two weeks after the opening day.

Check the fishing regulations based on where you want to fish. Some waters have special regulations for largemouth bass.

Largemouth bass are commonly found in shallow vegetated areas of lakes and rivers as well as vegetated bays of larger lakes. Shallow areas are good places to fish in spring and fall. Deeper and cooler water is a better bet during the hot days of summer. Bass are often found along weedlines, lily pad beds, bulrush stands, sunken humps, rocky points and near shore where fallen trees or branches provide shade and protective cover. 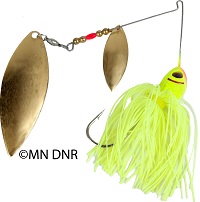 Bass can be caught in a variety of ways. In fact, it’s not uncommon for bluegill anglers fishing with a worm or crappie anglers fishing with a minnow to catch a largemouth bass. Still, most largemouth bass are caught by anglers casting plastic worms, soft plastic jigs, tube jigs, swim baits, surface lures, spinners or small spoons. One of the keys to catching bass is to find a technique you like and perfect it.

Many anglers are particularly partial to fishing with plastic worms or plastic crayfish, which can be hooked in a variety of ways. Some anglers like to hook them with no or very little weight attached to the line so the lure sinks ever so slowly. Others like to hook these plastic lures to a jig or weighted hook, and then jig the rig to trigger strikes. A common technique is to bury the hook in the plastic lure so as to make it weedless because largemouth bass fishing is often done in and around heavy stands of aquatic vegetation.

Surface lures are also popular, and can be particularly effective during the morning and toward dark when largemouth bass are feeding in the shallows. These floating lures – often made to look like frogs or replicate the movements of small dying prey fish – can trigger startling attacks as the bass bursts upward to inhale it. For this reason, fly fishing is also another effective way to catch bass when they are feeding in the shallows. Large poppers or large insect patters can spark exceptional rod-bending action.

Bass fishing rods tend to be six to eight feet long, with a 7 or 7 1/2-foot rod being good options. Such rods hit the sweet spot for casting accuracy yet also have enough stiffness for making good hooksets. Graphite rods are generally more sensitive than fiberglass rods, thereby enabling you to better detect light bites. Still, you will want to find the rod that fits your price range and fishing style as some rods are better suited, for example, casting spinner baits and others are better suited for flipping and pitching lures into tight spots.

Most bass anglers prefer to use bait-casting reels rather than spin casting reels, though spin-casting reels will work. If you intend to fish heavy cover you’ll want to consider braided or other heavy fishing line of at least 15-pound test so you can pull your lure free from many snags. Monofilament is a good choice for fishing shallow lures. Fluorocarbon is an all-around good choice as it has minimal stretch will also enable hard plastic baits to dive deeper. 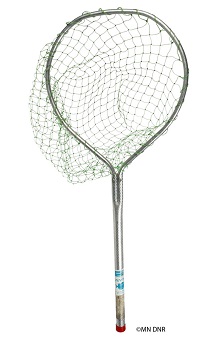 A net is a good thing to have when bass fishing. So too is a pair of needle-nose type pliers for removing hooks. 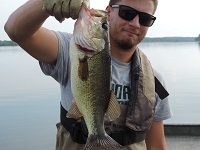