How to catch a sunfish

Fishing for bluegills is a favorite Minnesota pastime. The state's most commonly caught fish, the bluegill is abundant in most Minnesota lakes and many of its rivers. A member of the sunfish family, the bluegill is prized table fare, and large "gills" put up a surprisingly good fight. If you have never fished for bluegill now is a great time to start. They are relatively easy to catch with the proper tackle and technique. 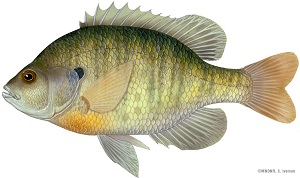 The inland fishing season is open year-around for bluegill, pumpkinseed, green, orange-spotted, longear, warmouth and hybrid sunfish. This is true too for waters that border Canada, North Dakota, South Dakota, Iowa and Wisconsin.

Still, check the fishing regulations based on where you want to fish. Some waters have special regulations for sunfish.

Many anglers particularly enjoy fishing for sunfish in spring and early summer. That’s when mature sunfish make plate-sized spawning nests in gravel or sandy areas along shallow shorelines, thereby revealing their presence when light and water conditions are right. As such, many anglers who fish for sunfish during these times of year scout shorelines in search of nesting colonies.

Spring and summer fishing is often best early and late in the day when fish are most active. Mid-day fishing can be good in autumn when water starts to cool. Sunfish feed by sight so they don’t bite much at night.

Where to fish changes from season to season. In spring and early summer, bluegills are often found in just a few feet of water. Nesting sunfish can be relatively easy to catch because the males, which guard nests, often attack any perceived threat. So, a worm, grasshopper or tiny jig that hangs over a nest will often trigger a strike.

In summer, larger sunfish move to water 10 feet deep and deeper. Bluegills can be found along weedlines, sunken brush, underwater humps, rocky points and other types of structure. Bluegills typically hang out just above the thermocline, which is the depth where water temperature changes dramatically. In fall, sunfish can be found in their late summer locations and in shallow areas near weedbeds, bulrush beds and other types of cover. 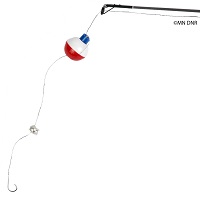 Sunfish are small so think small. A big bluegill is only nine to 10 inches in length. In fact, most Minnesota anglers start keeping sunfish when they are just seven or eight inches in length. So, bluegill fishing is all about small lures, small baits, small hooks and small bobbers and, when necessary, small weights to attach to very thin line.

Bobber fishing is the most popular way to catch sunfish because it is easy and it works. It works because bluegills, unlike many fish species, typically don’t chase fleeing minnows and baitfish. Instead, they like to inspect natural foods suspended in the water column or floating on the surface. Therefore, a small worm, sunfish leech or grub that hangs almost motionless in their vicinity can be an enticement. When bobber fishing, use a small bobber and preferably one that is shaped more like a pencil than a ball. Size and shape matter because if a bluegill feels too much resistance it will spit out the bait. Also, use very thin line – four-pound test is a good option – because big bluegills are very curious. They will often view your offering from multiple angles before biting or not biting. Typically, the thicker the line the less likely you are to catch a fish. When fishing spawning beds, it’s best to cast beyond the bed and then slowly retrieve the bait toward the fish to reduce the spooking that comes from casting. 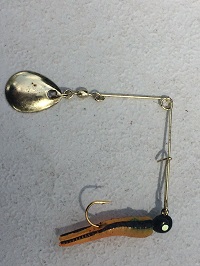 Casting tiny spinner baits and other artificial lures is another way to catch bluegills. Bluegills will often bite a 1/32 ounce jig that is dropped and raised or strike a slow-moving beetle-spin type lure.

Fly fishing is another effective way to catch sunfish, especially in spring when they are concentrated in shallow areas near shore. Because small insects are a major part of a bluegills diet, an artificial fly that resembles an insect can produce a lot of action. Popular fly fishing lures include poppers, rubber spiders, black ants and winged insect patterns. Bluegills are not nearly as fussy or spooky as trout so most any floating lure is likely to trigger a rise, and bluegills are more forgiving when it comes to poor casting too. 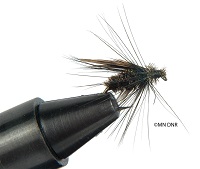 A light spinning rod and reel loaded with four-pound test monofilament line will work fine. So too will a telescopic cane pole, which is easier for kids to cast and provides plenty of fun because even a small fish will put a bend in these long rods. Use small hooks (No. 6 to No. 10 are good) and those with a long shank are best because they are easier to unhook from a fish’s mouth. You will also want to purchase some small spilt shot to attach to the line about a foot above the hook and below the bobber. The number of split shot you add to the line will depend upon the size of your bobber. If you put too much split shot on the line the bobber will sink. If you don’t put enough weight on the line the bobber will ride high in the water, or if it is a pencil-style bobber float on its side. The correct amount of weight is just enough so that you can easily see your bobber while making it easy for the fish to pull it down. 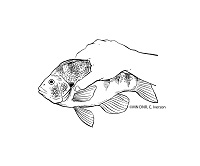