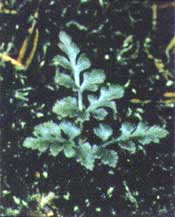 A series of design alternatives were developed which incorporated noise and riparian area setbacks, in response to public concerns. Upon discovery of the St. Lawrence Grapefern (Botrychium rugulosum) in Fall 1997, and the subsequent decision to prepare an Environmental Impact Statement (EIS), two additional alternatives were prepared in addition to evaluating the "no-build" project alternative. The EIS was narrowly scoped—focusing on proposed activities within the two tailings basins where the grapefern was found. The EIS evaluated and disclosed potential effects associated with each of the alternatives on grapefern populations and identified habitat. Socio-economic impacts, relative to the project, were also addressed in the EIS. The DNR and Advisory Committee members selected the "Limited Design Plan" because it fulfills project intent without significantly impacting state-listed ferns—and because it reduces vehicle noise by eliminating competitive motocross events.

During the planning process, Gilbert area residents voiced concerns about law enforcement, speeding, accidents, litter, noise, dust, and lake pollution. Adjacent private property owners were concerned about the potential for trespass and how the Iron Range OHV Recreation Area might impact the local tax base. The Local Area (Citizen's) Advisory Committee, early in the planning process, resolved that no substantial costs shall accrue to Gilbert taxpayers. The Recreation Area will be constructed and operated with funds derived from OHV license and registration fees, and from unrefunded fuel taxes. Every effort has been made to avoid, minimize, and/or to mitigate potential social, economic, or environmental impacts resulting from the construction and day-to-day operation of this facility.

Opportunities for public participation were provided throughout the 28-month project planning and environmental review process. Public meetings, mailings, and question and answer sessions were well-attended by interested groups and individuals. A telephone survey of approximately 200 persons was conducted to obtain a representative statistical sample of local public attitudes and opinions regarding the project. Public participation greatly influenced the final project design. 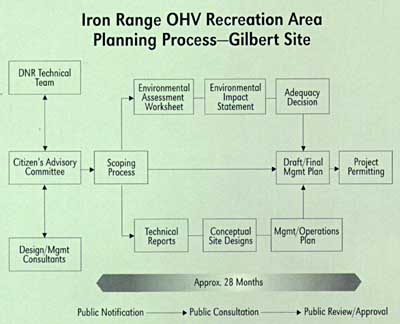