Prior to the introduction of purple loosestrife biological control agents into the United States, intensive testing was conducted to ensure that safe and effective agents were selected.

A search for potential agents in Europe, the native range of purple loosestrife and likely source of natural enemies that could serve as biological control agents, began in the mid-1980s. Of the more than 100 insect species found in Europe that feed on purple loosestrife, several were thought to have had excellent potential as biological control agents. Laboratory and field testing of potential agents began in Europe and was completed in North America under quarantine between 1987 and 1991 prior to the insects being approved for release.

Following the rigorous testing process and evaluation of the test results, four species of beetles were introduced into Minnesota after receiving approval for release from the United States government. This includes two leaf-feeding beetles, one root-boring weevil and one flower-feeding weevil. Galerucella pusilla and G. calmariensis are leaf-eating beetles which seriously affect growth and seed production by feeding on the leaves and new shoot growth of purple loosestrife plants. Hylobius transversovittatus is a root-boring weevil that deposits its eggs in the lower stem of purple loosestrife plants. Once hatched, the larvae feed on the root tissue, destroying the plant's nutrient source for leaf development, which in turn leads to the complete destruction of mature plants. The flower-feeding weevil, Nanophyes marmoratus, severely reduces seed production of purple loosestrife. 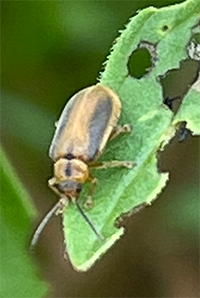 The implementation of purple loosestrife biological control in Minnesota

The effectiveness of biological control 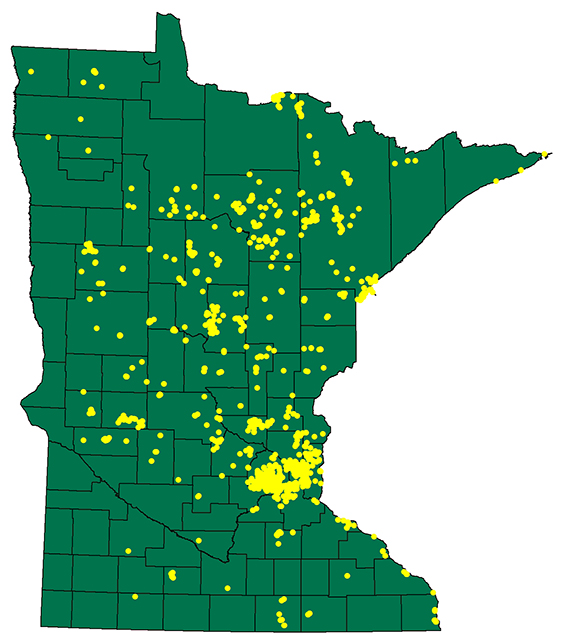 The long-term objective of biological control is to reduce the abundance of purple loosestrife in wetland habitats throughout Minnesota. Biological control, if effective, will reduce the impact of purple loosestrife on wetland flora and fauna. Purple loosestrife will not be eradicated from most wetlands where it presently occurs, but its abundance can be significantly reduced so that it is only a small component of the plant community, not a dominant one. Leaf-eating beetles released since 1992 have established reproducing populations at more than 90% of the sites visited. They have also dispersed from release sites and established at new sites. Leaf-eating beetles have been found on unmanaged purple loosestrife infestations more than 12 miles away from where they were released.

Biological control of purple loosestrife is not an eradication effort, rather it suppresses the plants, so they become a part of a wetland plant community. Because of this, purple loosestrife periodically reappears in wetlands, especially if the leaf-eating beetles become depleted.

In many areas, resource managers are now able to collect insects from established release sites and move them to new purple loosestrife infestations. These collect and move efforts move insects from where they are abundant to sites where they are needed. Collecting and moving loosestrife beetles requires less time and effort than rearing and releasing them but requires a beetle source where hundreds of beetles can be collected to be moved to another location. A minimum of 1,000 beetles should be collected in order to be successful.

In other areas, where loosestrife leaf-eating beetles are scarce, rearing and releasing them is the best method for establishment (or sometimes re-establishment).  This method only requires an initial collection of about 50 to 100 beetles, which can produce 1000’s of beetles for release. To find out more about each of these methods, follow the links below. The best time to collect beetles for biological control is in late May or early June.

How You Can Help

In order to get a collect and move or rear and release project going, contact your local Invasive Species Specialist for a list of potential beetle collection sites and the necessary permits you will need to work with the Prohibited Invasive Species, purple loosestrife. They can also provide netting material and possibly already made nets for moving the beetles if needed.