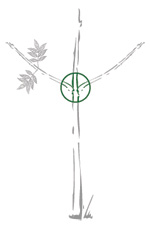 1. Has branches that grow directly across from one another 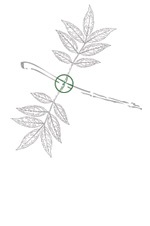 2. Has compound leaves
(a group of leaflets joined by a stalk to a woody stem) 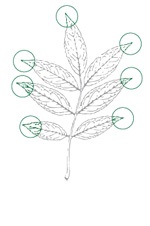 3. Has five to many leaflets with smooth or finely toothed margins

A medium-sized tree with a height of 35' to 75', a diameter of 12" to 24"; the crown is rounded and made up of a few short branches; the trunk is supposed to be straight, columnar, but is often leaning or crooked.

Grayish on older portions of the tree, furrowed and somewhat separated into thin scales that are easily rubbed off; a new growth of light green color.

Opposite on stem, length 9" to 16", pinnately compound with seven to 11 yellowish-green leaflets each 4" to 5-1/2" long, oblong in shape, and not stalked except the terminal leaflet; terminal bud is large and pointed; leaves smooth on both surfaces; turn yellow to brown in autumn.

Flat, winged, one-seeded samara, 1" to 1-1/2" long; the wide, thin wing that is rounded or slightly notched at the end nearly surrounds the seed part; seeds usually germinate and start growing in the second year.

Fairly plentiful in the state except in the western half; most abundant in cold, moist locations and along low banks of streams; shade intolerant, slow growing.

Height 40' to 60', up to 24" in diameter; round topped with slender spreading branches.

Opposite on stem, length 10" to 12", pinnately compound with seven to nine stalked leaflets each 2-3/4" to 5" long, pointed and slightly toothed on margin; bright green or yellowish green on both sides, turning yellow in autumn.

Common throughout the state except in the western prairie region; most abundant in valleys and along streams; moderately shade tolerant; fairly fast growing and withstand severe soil and climate conditions.

Large tree; tall and often graceful trunk; average height 50' to 80' with a diameter of up to 24"; rounded to the pyramidal crown.

Opposite on stem, length 8" to 12", pinnately compound with five to nine stalked, sharp-pointed leaflets; dark green and smooth above, pale green or whitish beneath; turns yellow or purple in autumn.

The winged samara is 1" to 2" long; resembles a canoe paddle blade with seed toward the handle end; seeds mature in autumn and are distributed effectively by the wind.

Found only in the southeastern part of the state, grows best in rich soil; intermediate in shade tolerance.