Emerald ash borer is an invasive insect that has killed millions of ash trees throughout the eastern half of the U.S. and southeastern Canada. Native to eastern Russia, northern China, Japan, and Korea, emerald ash borer infests and kills both weak and healthy ash trees. All ash species native to North America are vulnerable to attack. With nearly 1 billion ash trees in Minnesota, the spread of emerald ash borer will have a serious impact on our forests and communities.

Although frigid winter temperatures in northern Minnesota may help to slow the spread and survival of emerald ash borer, cold won't stop it completely. Learn how insect survival strategies help them survive winter in Minnesota: How cold is too cold for Emerald ash borer?

Most of the emerald ash borer life cycle takes place below the bark. Woodpeckers readily probe for larvae feeding beneath the bark, and often reveal infested trees during the winter months. These trees become covered in light-colored "flecking" as woodpeckers remove the outer bark.

As tunnels (called galleries) from feeding larvae accumulate and disrupt the flow of a tree's nutrients, trees begin to show signs and symptoms of the infestation. Once symptoms have started to show, trees generally die within one to three years.

Emerging adult beetles chew characteristic 1/8-inch-wide, D-shaped exit holes that can be useful in confirming infested ash trees. Because the holes are small and frequently high in the tree, they can be difficult to find.

Epicormic sprouts growing at the base of an ash tree. Photo by: Josheph O Brien, USDA Forest Service, Bugwood.org

Galleries weave back and forth across the wood grain. EAB exit holes are also shown. Photo by: Michigan Department of Agriculture, Bugwood.org

If you think you have seen evidence of an infestation, please report it to Report a Pest or call 888-545-6684.

Where is emerald ash borer?

Minnesota forests are home to an estimated 1 billion ash trees. Many of these trees are in nearly pure stands of black ash growing in wet areas, where they help maintain the water table. Once emerald ash borer has killed these trees, the wet forest habitat may change over to grass, cattails, and shrubs, threatening the plants and animals that rely on black ash and forest habitats.

Minnesota cities also have an abundance of ash, making up 60 percent of the trees in some communities. City budgets will be further strained as more and more communities are challenged with removing large numbers of trees killed by emerald ash borer. 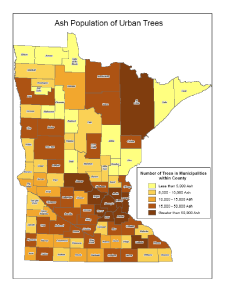