How cold is too cold for Emerald ash borer?

If you're a forester in northern Minnesota, chances are you've already entertained quite a few questions about just how cold it will need to be before overwintering emerald ash borer (EAB) larvae begin to die. Here's a brief overview of EAB winter physiology and results of some current research that should help to explain that although our cold climate may help slow the rate of population expansion, it won't be enough to stop the spread of EAB. 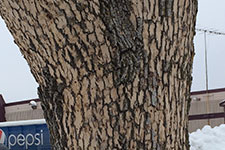 Woodpecker flecking on a tree in Apple Valley

Like many insects, overwintering EAB larvae are able to survive in climates with subzero winter temperatures using the strategy of supercooling, or the ability to cool a liquid below its normal freezing point without ice formation. To avoid freezing of their internal fluids, different insects produce a variety of specialized sugars, alcohols, or antifreeze proteins during the winter months. These compounds allow insects to endure subzero body temperatures far below where their internal fluids would normally freeze. Once insects become seasonally acclimated to the cold, temperatures below this supercooling point are required before significant portions of a population begin to die.

So what is the supercooling point for EAB larvae, you might ask? Several recent research projects have provided somewhat different answers. Research in China within EAB's native range has indicated that the supercooling point for EAB ranges from -9.4°F to -15.5°F. In North America, research from Ontario, Canada has indicated the supercooling point might be as low as -23°F. Perhaps of greatest interest to us, though, are the results of research carried out right here in Minnesota. In an experiment where EAB-infested logs were kept outdoors for the winter near Grand Rapids, Minnesota, researchers from the U. S. Forest Service and Minnesota Department of Agriculture found that the supercooling temperature for the Minnesota EAB population was about -13°F. Based on these results, a model was created that predicts that about five percent of EAB larvae should die when temperatures reach 0°F, 34 percent at -10°F, 79 percent at -20°F, and an impressive 98 percent should die at -30°F. ¹

Though ambient air temperatures as low as -30°F might not be a rare occurrence in northern Minnesota, it is important to keep in mind that not all EAB larvae will experience that same -30°F within a tree. In addition to insulation provided from the outer bark, larvae overwintering at the base of trees below the snow line will be especially well-insulated. It may take prolonged periods at a certain ambient temperature before temperatures beneath the bark will ever drop to the same level.

Though a substantial number of EAB larvae are likely to be killed by winter temperatures each year, what is most concerning are the more cold-tolerant individuals that are more likely to survive. Over time, these more cold-tolerant larvae could begin to represent a greater portion of the reproductive population. This will not actually lower the existing supercooling point of EAB larvae, but it could eventually result in a population with a lower average supercooling point. While frigid winter temperatures may be an added benefit for now, we should not allow the cold to give us a false sense of security when it comes to actively managing Minnesota's ash resource. 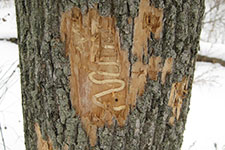