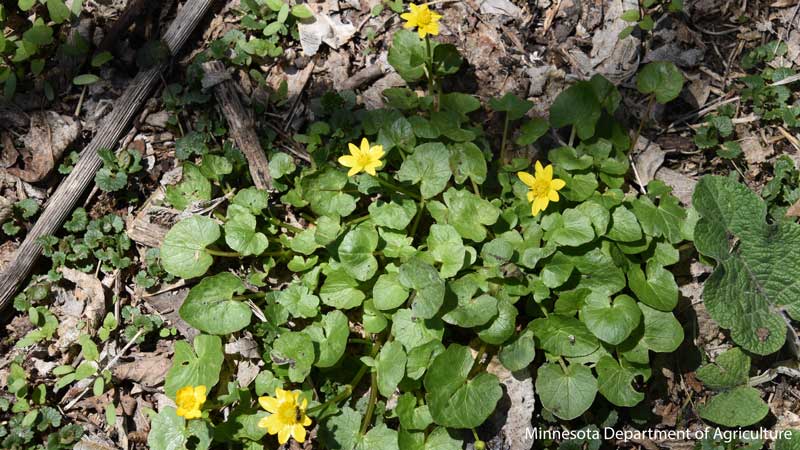 Lesser celandine is a short herbaceous perennial. It flowers early in the spring, has yellow flowers, and grows 4–12 inches tall.

The leaves are on short stalks. Leaves are kidney-shaped, with a heart-shaped base, varying in size between 1.6-3.5 inches wide. Leaves are dark green in color and smooth with wavy edges. Along the stems of lesser celandine, spherical white structures (bulbils) form after the plant flowers.

Flowers are showy, bright yellow in color, and they have a glossy shine to them. Flowers have 8-12 petals. On the underside of the flower, there are 3 green sepals. In Minnesota, it flowers in early spring, as early as late March and as late as early May.

Lesser celandine can produce up to 70 seeds per plant, which can be viable, though its main reproductive strategy is vegetative spread by bulbils (small bulbs that can form between the leaf and stem) and underground tubers.

The roots of lesser celandine are fibrous, with small, potato-like tubers.

Lesser celandine grows for a short time in the spring, starting to grow as soon as snow melts, and completing its lifecycle by June. It spends much of its year as underground tubers. It can grow in any light condition – full shade to full sun. It also can grow in any soil condition, though it prefers moist, sandy soils, along streambanks and in floodplain forests. It mainly reproduces vegetatively by tubers and bulbils.

Lesser celandine is native to Europe, northern Africa, western Asian and Siberia. It was introduced as an ornamental plant. Lesser celandine is often found along creeks and rivers. Flood events can spread this species by moving tubers and bulbils downstream. Refer to EDDMapS distribution maps for current distribution.

Lesser celandine is not regulated. It is proposed to be regulated by the Minnesota Department of Agriculture in 2023 as Restricted Noxious Weed which would make it illegal to import, sell, or transport.

Threat to Minnesota
What you should do

One way that invasive plant seeds and fragments can spread is in soil. Sometimes plants are planted purposefully. You can prevent the spread of invasive plants.

Mechanical control can be done by pulling the plant by hand or with equipment such as rakes or cutting blades. Hand-digging is possible with smaller infestations. All bulbils and tubers need to be removed, so hand digging is difficult in larger populations. If pulling plants, have a plan for what you will do with the removed plants as bulbils and tubers can generate new plants. See the Minnesota Department of Agriculture noxious weed disposal website for information on weed disposal recommendations.

Herbicide control can be done using glyphosate. Systemic herbicides are taken up by plants and move within the plant, which can kill leaves, stems, and roots. Treat plants in late winter or early spring to minimize impacts on native species.