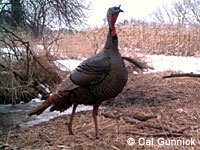 Once extirpated from Minnesota, wild turkey restoration has been a phenomenal success. Today's turkey population descended from a successful release of turkeys that occurred between 1971 and 1973 when 29 adult wild turkeys were trapped in Missouri and transplanted to Houston County in extreme southeastern Minnesota. Since this modest beginning over 30 years ago, Minnesota's population has grown to more than 70,000 wild turkeys.

Wild turkeys are active during the day and roost in trees overnight. They nest on the ground and the young turkeys (poults) are able to leave the nest shortly after hatching. They immediately begin foraging for insects, but stay in a brood with the hen until their flight feathers have developed. Because turkeys are large and active during daylight hours, they are often observed foraging for insects, grubs and seeds, their primary food source. However, since they are highly visible, they have sometimes been blamed for crop damage that has actually been caused by other animals such as deer, raccoons, squirrels or blackbirds. Studies in Wisconsin, Iowa and Ohio have concluded that turkeys seen in crop fields eat mainly waste grain and rarely cause significant crop damage. Instead, they can benefit farmers by eating insects and weed seeds.

As both the human and turkey populations expand in Minnesota it is only natural to expect that increasing interactions will occur, some of them negative. Some wild turkeys that reside in urban areas have become acclimated to humans, which can create problems. Compounding the problem is the illegal practice of raising and releasing turkeys. Although well intentioned, people who release pen-reared turkeys are doing more harm than good. Pen-reared birds pose a potential disease threat to the wild turkey population, as well as other domestic poultry. They are also not wary of humans and may become a nuisance by roosting on roofs, in trees near homes, and on decks, and they are known to occasionally damage painted automotive surfaces. Some turkeys, usually the yearling males (jakes), may also become aggressive and chase homeowners, children and pets. If this behavior persists, these birds may need to be removed and destroyed by special permit. Tame turkeys are counter to the wild turkey restoration effort and are not typical of the wily behavior necessary for long-term survival of the largest of North American game birds.

At first, the appearance of turkeys is usually novel and welcome. Property owners often regrettably feed the birds to encourage them to stay. It is only after the droppings accumulate, property is damaged, or residents are chased by aggressive jakes that they are considered a nuisance.

Remember that wild turkeys have a "pecking order" and that habituated birds may respond to you as they do to another turkey. The best defense against aggressive or persistent turkeys is to prevent the birds from becoming habituated in the first place by being bold to them. Everyone in the neighborhood must do the same; it will be ineffective if you do so only on your property. Each and every turkey must view all humans as dominant in the pecking order and respond to them as superiors rather than subjects. Habituated turkeys may attempt to dominate or attack people that the birds view as subordinates.

Adult humans may drive off or deter these aggressive birds with bold action by forcefully fending them off with brooms or other non-injurious implements. However, the turkey may then recognize that individual as dominant but continue to respond to other people as subordinates. 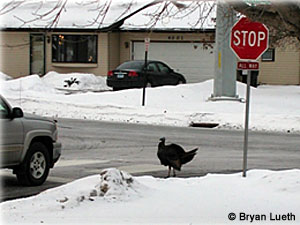 Some wild turkeys, especially in spring and early summer, choose to stand, walk, or pace back-and-forth in the center of busy highways, dodging vehicles and blocking traffic. Some (but not all) of these birds are juvenile males and often do not strut or display. The reasons for this peculiar behavior are unknown.

"Highway" turkeys are not easily dispersed, if at all. If a hazardous situation exists, and the birds do not soon disperse on their own, they may have to be forcibly removed.