Living with bears in Minnesota 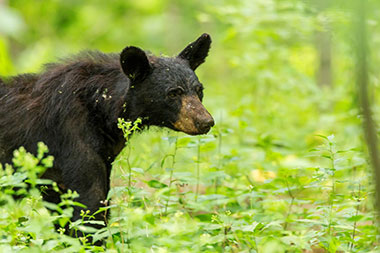 If you live in Minnesota, you live in bear country. The black bear is an iconic species usually associated with Minnesota’s north woods, and, while they are common throughout the forested northern and central portions of the state, they can live throughout the state, sometimes wandering into cities and towns.

Black bears are naturally cautious animals that avoid human contact for their safety, but conflicts between people and bears can arise. To live peacefully with bears, humans play a part by being responsible for their behavior. We can prevent conflict and stay safe, at home and while exploring nature, by:

Conflicts between people and bears have increased as more people build homes and cabins and recreate in northern and central Minnesota. Conflicts can arise when bears interact with domestic pets, tip over garbage cans, or damage bird feeders, personal property, beehives, livestock and agricultural crops.

The best way to avoid problems with bears is to not attract them in the first place. Once a bear finds a food source, it will return repeatedly. Bears prefer natural foods and are especially attracted to calorie-dense food sources. They have an incredible sense of smell, are opportunistic and are easily attracted to foods or food sources provided by humans (including things like dog food, birdseed and grease).

Bear attractants are things that smell, taste or look like food to bears. These include birdseed, dog food, grease on grills, garbage, fish entrails and fruit. Taking the initiative to secure or remove attractants will help prevent bears from becoming a nuisance.

Bears and people meet under a variety of circumstances. Encountering a bear can be a positive, memorable experience. Black bears, by nature, are wary of people and not normally aggressive. They are, however, large, powerful and surprisingly fast-moving animals. Anyone who encounters a bear should have healthy respect for it, but, at the same time, do not feel that it is an inherent threat.

Learn more about how to prevent or prepare for bear encounters in these environments:

If you do encounter a bear, learn how you can safely respond, what to do if the bear becomes aggressive, and how bear spray can help you defend yourself.

People share in the responsibility to prevent conflicts with bears, and the DNR relies on the public to manage attractants as the primary means for reducing conflicts.

If you have persistent bear problems after making recommended adjustments from the bear preparedness tips, contact your local DNR Area Wildlife Manager for assistance.

Find out more about dealing with problem bears.

For more information on bear population management or how to coexist with bears, visit: